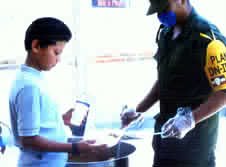 The nearby Volcan de Fuego, which is threatening to erupt at any moment, hardly scares Maximi Ramirez, a lifelong resident of La Yerbabuena, Colima, a rustic pueblo just eight kilometers from the fire-spewing peak. But the rumored intentions of the state government to relocate the local population worry him a lot more than the prospect of being swept away by a fast flowing stream of molten lava.

"(The fear) isn't so much of the volcano," the father of six explained in his small open-air convenience store, on a calm evening, cooled by a gentle breeze and the elevation. "It's the economic interests that want to take our land."

Despite frequent small eruptions over the past six years and living so close to the volcano, Ramirez and the hamlet's other residents refuse to leave. Small farmers, growing beans, corn and coffee in the regions rich volcanic soil, expressed similar sentiments, never fully abandoning their small farms, despite repeated evacuation orders. A steady stream of curious tourists, armed with cameras and binoculars, have also ventured up the region's narrow twisting roads, which often lack shoulders, guardrails and proper pavement, to view the volcano's intermittent bursts.

The Colima Volcano ranks as one of the ten most active volcanoes in the world. It has had six major eruptions since the Spanish settled in the area in the 1500s. Located in an active seismic zone, a large earthquake rocked the state capital in 2003, claiming more than 20 lives, and a tsunami washed over Cuyutlan in 1932. The last big eruption occurred in 1913.

The most recent volcanic activity began on May 23, with the largest eruption in more than 20 years. The 12,533-foot volcano blew its top again on May 30 and last Sunday morning as well, producing a "spectacle" that many curious locals crawled out of bed to witness.
"It woke me up, but I wasn't scared," said Vicente Guzman Cueves, a La Yerbabuena resident sporting long hair, a mustache and gotee and wearing green and blue robes like Jesus Christ -- who Guzman said sent him to the mountain town. "I was curious."

"It's something normal," said Antonio Alonzo Oseguela, the hamlet's representative in the regional government based in Comala. He added that most of the 38 inhabitants are "accustomed" to the loud bursts.

The blasts, though, frightened at least one soldier stationed in the town in case of an emergency. He acknowledged the fear, but said little else during a break from an informal soccer game between teams of competing soldiers on a basketball court, citing Mexican military rules, which forbid members to speak with the media.

During a previous eruption in 2002, the military fled La Yerbabuena, leaving without any members of the civilian population except a local man who transported a group of soldiers out of the volcano zone in a pickup truck. The soldiers later returned, a move that angered many in hamlet.

"There's no reason for (the soldiers) to be here," Alonzo Oseguela said, citing article 729 of the Mexican constitution, which says soldiers are to remain in their barracks during peacetime.

"We're struggling now because they're occupying a community place," he said in reference to the community hall, which the military uses as a temporary headquarters.

Along with wanting the military out, Alonzo Oseguela said, "We're struggling to survive," a reference to suspicions the state government has ulterior motives for the community and surrounding countryside once La Yerbabuena's residents leave.

Ecotourism is gaining popularity in Colima and many tourists visit the area for daytrips and camping excursions. A former hacienda and coffee plantation in nearby San Antonio is now a five-star Aman resort, charging its guests room rates of more than 1,000 dollars per night. Alonzo Oseguela also suggested the town could become part of the nearby volcano research center.

Back down the narrow, bumpy road connecting La Yerbabuena with San Antonio, the operators of a RV park and private fishing hole said it was business as usual, despite the volcanic activity. The owner of a small convenience store on the road up to the volcano from Colima reported a surge in sales after the latest small eruption.

Meanwhile, across the border in Jalisco, Civil Protection authorities evacuated 48 people from Juan Barragan, an ejido just 7.8 kilometers from the volcano, on Monday morning, housing the displaced residents at a temporary shelter in nearby San Marcos.
Still, most of the residents returned to their farms during the day to feed their animals and sow corn before the rainy season commenced. When the military served lunch last Wednesday, consisting of beef stew, rice, beans and agua fresca, only children -- taking a break from a nearby tent-school -- and several elderly women attended.

Over the meal, several women reminisced about previous volcanic activity, but no one expressed any trepidation about returning.

"Some people live by the beach," said Maria Vega, who has been evacuated six times since 1998, in a reference to the recent tsunami in Southeast Asia. "It's the same danger. We're accustomed to it."

Published in the Guadalajara Colony Reporter.
Posted by David Agren at 21:28