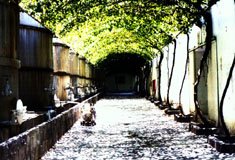 As the second-class bus neared Parras de la Fuente, Coahuila, an oasis town midway between Saltillo and Torreon, lush vegetation began to appear. Children splashed around in local swimming holes. And the air felt much cooler; a welcome respite from the oppressive heat of nearby Monterrey.

The Pueblo Magico, or Magic Town – a designation bestowed on select Mexican villas by tourism authorities – just five hours drive from the Texas border, offers a seemingly endless assortment of surprises, which contrast with its harsh surroundings.

In the middle of the Coahuila desert, the oldest vineyards in the Americas bloom at Casa Madero. Across town, the Hacienda del Perote distills sotol, an earthy spirit, from the agaves native to the northern deserts of Coahuila, Durango and Chihuahua. And in small stores around Parras de la Fuente, confectioners make sweets from the abundance of locally-grown pecans.

But Parras de la Fuente, awash in history and attractions, serves up much more than just fine food and drink.

But more than Madero or the climate, wine put Parras de la Fuente on the map. Although it lacks the status Mexico’s better known wine regions in Baja California and Queretaro, Parras de la Fuente’s vineyards date back to the 1500s. Legend has it Hernan Cortes ordered the first Mexican vineyards planted in 1524.

Fine wine in Parras de la Fuente begins with Casa Madero, the oldest winery on the continent. It bottled its first wines in 1597.

Set in the gorgeously-restored Hacienda San Larenzo, Casa Madero makes numerous wines for export, sending most of its production to Europe and Japan.

The Spanish first planted mission grapes in Parras but an 18th century plague wiped out much the industry. While some left the wine business, planting pecans instead, those who persevered switched to lenoir grapes, which were resistant to the plague. A small grape with large seeds, it produces sweet wines - for which the region became famous. But with changing consumer tastes, Casa Madero began planting other grapes, which produce better table wines.

“Casa Madero makes wine for the European market so unlike California wine, it has more fruit flavors instead of oak,” Hernandez explained.

Hacienda del Perote makes sweet wines from lenoir grapes like Jerez and Moscatel along with a port. It also produces a sweet vermouth.

It also began distilling sotol, a regional specialty in Northern Mexico.
“Sotol here is what tequila is in Jalisco or mezcal is in Oaxaca,” said Veronica Marrero, a Hacienda del Perote employee.

Like tequila and mezcal, sotol comes from agave-like plants. And like other spirits, distilling techniques determine the quality of the beverage.

Hacienda del Perote double distills its sotol, removing many of the hangover-inducing esters and alkaloids.

“We make a clean product,” said Ignacio Chacon, owner of the hacienda.

His blanco Sotol, sold under the brand name El Mejicano, has little aroma and mixes with other beverages like a neutral spirit. Just recently, he began exporting Sotol.

“It’s a product that’s becoming popular because of the quality,” he said.

Chacon recently renovated his 407-year-old hacienda, converting it into a 19-room hotel. It boasts comfortable rooms with high ceilings, a large swimming pool fed by the oasis and complimentary beverages – made onsite.

Back down a bumpy road towards Parras de la Fuente, the Capilla Santo Madero is a can’t-miss attraction, deserving a stop before finishing a visit to the area. Although requiring a steep, but not too difficult climb to reach it, the tiny church draws the faithful in search of a blessing – along with those wanting to take in the view. On one side wall inside the three-row deep sanctuary, people post photos of loved ones and notes, requesting divine intervention.

Although simply viewed as a pit stop for many making a run for the border, Parras de la Fuente deserves a thorough exploration. Between the wine, climate and festive friendly small-town atmosphere, it’s a hard spot to avoid and even more difficult place to leave.
Posted by David Agren at 16:35

This is my hometown,and believe me its a beautiful place to live or to visit. Miriam Sanchez

This is my hometown, and believe me, its a beautiful place to visit. Miriam Sanchez

My Mother was born in Parras. My grandfather worked as a chauffer for Madero in the early 1900's.

I LIVE IN AURORA IL, PARRAS IS MY HOME TOWN ITS A BEAUTIFUL PLACE TO LIVE AND ALSO VISIT I STILL HAVE FAMILY AND MY TWO SISTER THAT LIVE IN PARRAS....
DEISY VITELA

My name is WENDY & I was born in parras,parras is a great place to visit it has alot of history but for me the best time to visit is on agust we have the best FERIA. I don't know that many people in Chicago that are from Coahuila so I'm glad I found this page.