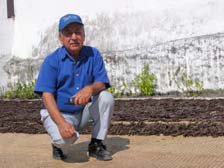 Cornelio Olmos de la Cruz figured he had found a lucrative cash crop when he planted vanilla on his small farm near Gutierrez Zamora, Veracruz several years ago. With the world price hovering around 200 dollars per kilogram, the investment looked profitable. A local vanilla processor encouraged him – along with his neighbors – to grow more of the popular flavoring agent. But by the time his vines matured, the bottom had fallen out of the international vanilla market, leaving him with an unprofitable crop, a mountain of debt and a once-eager buyer unwilling to pay him a worthwhile price.

"Vanilla was the biggest scam," he lamented bitterly after arguing with a buyer.

"Two years ago, we were told to plant vanilla."

The Papantla, Veracruz area bills itself as the zone that "perfumes the world" and for its small vanilla farmers, the region's prized crop reeked of cash for the past five years. A spike in the world price, beginning in the late 1990s, made vanilla so valuable, thieves would pilfer the money-colored pods as the winter harvest neared. With prices peaking at 500 dollars a kilogram, hundreds of landowners like Olmos planted vanilla vines expecting a sweet harvest. The pay out, however, never materialized.

"With this price … (the farmers) are going to get rid of their vanilla and start harvesting other things," commented Salvador Gonzalez, a farmer, who has 2,000 vines on a plot near Gutierrez Zamora.

"It's just not profitable."

Four years ago, Gonzalez received more than 500 pesos for a kilogram of raw vanilla. Nowadays his crop fetches between 40 and 50 pesos per kilogram.

The Mexican producers' troubles started far away from Veracruz state, which hugs the Gulf of Mexico to the east and the rugged Sierra Madre mountains to the west, on the other side of the globe. Madagascar, the world's largest producer, recently began flooding the market again with vanilla after enduring five years of weather-related calamities.

In a normal year, Madagascar produces 60 percent of the global supply. A cyclone in 2000 wiped out approximately one-third of the island's vanilla crop. Unusually cool weather in 2002 also dampened its production. The resulting shortage, coupled with strong international demand, sent prices soaring.

Madagascar's production has now returned to its previous high levels, arriving at the same time as Mexico's spate of newly-planted vanilla vines matured.

In addition to the current glut in the world market, the demand for costly natural vanilla, which flavors everything from desserts to cola, weakened over the past five years as vanilla users substituted inexpensive artificial extracts for the real thing.

According to Craig Nielsen, CEO of Nielsen-Massey Vanillas, a vanilla processor based in Waukegan, Illinois, worldwide demand for natural vanilla has decreased by "35 to 40 percent" over the past five years. He estimated the world market has a surplus of 500 tons, meaning prices should remain relatively stable for the next two to three years.

Pedro Larios, however, also blamed a small group of international vanilla buyers, who he said wield immense power over the producers.

"We depend on … the (foreign buyers)," he explained.

"Previously, when there was a harvest, someone with a lot of money would come and buy it all."

In an effort to find new markets, Larios, whose second-generation enterprise primarily cures and then sells vanilla to large international buyers, recently struck a small deal with a Japanese perfume manufacturer, which allows him to receive a better price by cutting out intermediaries.

Although vanilla is native to Mexico, the country now accounts for approximately one percent of the world's production. Most of Mexico's vanilla grows in northern Veracruz, a region just south of the Tropic of Cancer that receives adequate rainfall, experiences few weather extremes and has good soil drainage. The Totanac Indians dubbed vanilla, the only orchid that produces an edible fruit, xanath and used it to flavor atole (a corn-dough beverage). The Aztecs would add it to chocolate. Legend has it Aztec emperor Moctezuma offered chocolate flavored with vanilla to Hernan Cortes. The Spanish later brought vanilla back to Europe, where it became enormously popular.

Besides Veracruz, farmers in Puebla, San Luis Potosi, Hidalgo and Oaxaca also cultivate vanilla. Little of their harvest is processed in Mexico, where natural vanilla consumption is low.

"We now consume vanilla, but not very much," Larios said, adding that virtually every vanilla product sold in Papantla's markets is artificial.

Mexico produced all of the world's vanilla until the French devised a method in the 1800s for pollinating vanilla flowers by hand, allowing the crop to be grown in far-flung places like Madagascar, Indonesia and the South Pacific. India and Uganda have also emerged as strong vanilla-growing countries over the past few decades.

With the advent of foreign competition, the majority of Veracruz farmers abandoned vanilla cultivation. A petroleum boom lured many into the oil industry. Mexico virtually ceded the vanilla market to foreign producers.

"Madagascar began producing 1,500 tons [annually] and started selling it … everywhere, allowing them to pass us in the world market," explained Larios, a chemical engineer by training, who previously worked for Pemex.

"Us, we became oil workers."

Veracruz farmers only rediscovered vanilla over the past 20 years, but an unpredictable world market has left many disillusioned with their choice. Additionally, vanilla requires an immense amount of labor during the harvest and pollination seasons, which is found more cheaply in other parts of the world.

"(In Madagascar), manual labor is cheaper and they harvest so much," said Crispin Perez Garcia, president of the National Vanilla Producers' Board, as he watched workers at Casa Larios' Papantla facility prepare freshly harvested pods for the long and at times labor-intensive curing process.

At Casa Larios, rows of vanilla pods baked under the hot sun covering almost all of the expansive front patio. The pods, which resemble fat green beans upon arrival, are first boiled for 30 seconds. The pods are then spread out on the patio, staying in the sun until the internal temperature reaches 55 degrees. Later, the pods sweat in a large wooden box, which releases the aromatic oils. The drying and sweating process is repeated 25 times, at which point the shriveled pods have blackened and give off an intense aroma that's anything but plain. Larios explained that it takes five kilograms of raw vanilla to make one kilogram of cured vanilla.

Mexican vanilla producers like Perez insist they grow the world's best vanilla. According to a laboratory analysis provided by Casa Larios, Mexican vanilla strikes the right flavor and aroma balance. Vanilla from Madagascar has an intense flavor, but provides less of an aroma. Indonesian vanilla lacks some of the same flavor, but provides a powerful aroma. Madagascar's vanilla, however, has proven popular – even though Perez insisted, "It's not the same quality. It's a different type of vanilla."

Craig Nielsen differed, saying, although it has more "spicy notes," Mexican vanilla is somewhat similar to Madagascar's. Many of his clients buy Mexican vanilla for its cachet of being a Latin American product, although in some cases, the spiciness adds something special to their recipes.

Little of that matters much to Cornelio Olmos de la Torre, though, whose experimentation in large-scale vanilla farming has left him pondering his future. The former soldier and 30-year veteran farmer, now plans to rip up most his vanilla vines and might raise sheep instead.

From the Guadalajara Colony Reporter
Posted by David Agren at 17:59