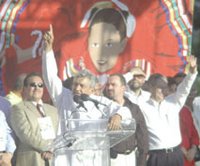 Photograph by : B. Miller

Andres Manuel Lopez Obrador (AMLO) supporters in Guadalajara showed some bravado last Thursday, brandishing T-shirts that proclaimed: "I don't turn yellow, yellow's my color," a reference to the sunny-yellow logo of the Democratic Revolutionary Party (PRD). The presidential frontrunner struck a bold tone in Guadalajara last Thursday, speaking forcefully - into a warped sound system - on the themes that have kept him atop every public-opinion poll since the campaign began; namely: ending poverty and discrimination, reworking "neoliberal" economic policies and increasing social priispending.

A consummate campaigner - AMLO's been on the hustings since resigning as Mexico City mayor in July 2005 - he tailored his message for a Jalisco audience, invoking the memory of state icons, including the recently deceased artist Juan Soriano, and explaining how many jaliscienses would benefit from the PRD proposals.

Topping the list of promises - he rattled off 35, covering virtually every theme imaginable - a nationwide payment scheme for the elderly, similar to the program he introduced while serving as mayor of Mexico City. Other politicians - from all parties - have adopted the theme too, putting similar planks in their campaign platforms.

"When we introduced it in Mexico City, President (Vicente) Fox called it 'populism,' " AMLO chortled.

He also promised more places for students in the Universidad de Guadalajara and healthcare for the 40 percent of Jalisco residents he said lack coverage. Somewhat vaguely, he pledged to ensure Guadalajara has an adequate supply of drinking water and that Lake Chapala stays healthy.

Once again, he promised to pull Mexico out of parts of NAFTA in order to protect corn and bean farmers, who he said "have confronted the neoliberal politics of the [Revolutionary Institutional Party] PRI and the [National Action Party] PAN.

The message predictably played well at the rally - even though Jalisco is often a PRD wasteland. Ignacio Orozco, an organizer for the Workers Party (PT), one of the two minor parties in AMLO's coalition (dubbed, "For the good of all"), predicted it would attract independent voters.

"We're searching for those voters that aren't involved with any political party," he explained.

AMLO leads some opinion polls by nearly 10 points, easily outpacing the PRD's normal popularity level. He attributed it to voter disappointment; Mexico's economy has stagnated and poverty is still rife. "The only thing that's changed in the last few years ... is the mentality of the community," he said.

Civic officials figured approximately 7,000 supporters attended the rally, blanketing the Plaza Liberacion in PRD yellow, spare a few adherents of the Convergencia Socialista (another small-party backing AMLO) clad in orange. Many showed off yellow T-shirts with a variety of slogans, including, "AMLO es mi gallo!" (Gallo is colloquial for go-to guy). Or in place of an official shirt, some came wearing Club America jerseys. Young perredistas (as PRD members are known) sported yellow bracelets: some had original Lance Armstrong bands, leftover from last year's craze; others wore similar ones with the slogan, "I support AMLO."

Besides delivering a nearly 60-minute speech, AMLO feted the local PRD candidates for municipal presidencies and governor. Eugenio Marin Hernandez, a lone protestor at the rally, holding a sign accusing the PAN, PRI and PRD of all being the same, rebuked the local candidates, saying, "(The PRD) is full of ex-priistas ... Their acts show they haven't changed."

Of the local PRD leadership, he commented, "They're always working towards the next election, not for the people."

Still, despite his disenchantment, he plans on voting for AMLO.

From the Guadalajara Colony Reporter
Posted by David Agren at 15:37