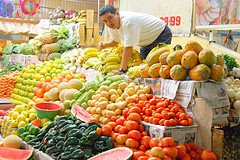 A kilogram of tomatoes at my local Gigante supermarket in Guadalajara now sells for 40 pesos. I took a pass.

The price of the normally-cheap Mexican dietary staple jumped recently due to hurricane Lane, which last month battered Sinaloa, a major tomato-producing state. (Sinaloa adorns its license plates with a tomato and the Culiacan baseball team is called the Tomateros, or tomato growers).

And as an unexpected consequence of the high price, Mexico's inflation rate also soared, passing the four-percent plateau. Low inflation - it dipped below three percent for the first time ever during the winter - had been one of the Fox administrations biggest accomplishments, but that could now be jeopardized.

The index's spike won't resolve itself until after several more harvests. In the meantime, expect to see fewer tomato-based dishes and fresh salsas on the nation's menus.
Posted by David Agren at 16:27