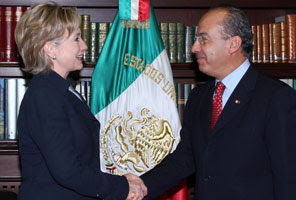 U.S. Secretary of State Hillary Clinton rejected talk of Mexico becoming a failed state during a visit Wednesday to the capital, where she sought to reassert solidarity with a neighbor increasingly sensitive to criticism from Washington.

"I don't believe that there are any ungovernable territories in Mexico," Clinton said at a press conference, challenging a popular talking point among U.S. military strategists, conservative lawmakers and talk show hosts.

"I remember very well, when we had such a crime wave, 15, 20 years ago, that there were many parts of cities in our country where people didn't feel safe going to," she said.

Clinton's comments came at a time when Mexican officials, including President Calderón, have expressed increasing frustration with U.S. alarmism over the drug violence engulfing parts of the nation. Such talk, Mexicans complain, ignores the United States' own culpability in the drug war.

But on Tuesday, Clinton acknowledged that the United States, with its demand for illegal drugs and inability to curb the southward flow of weapons, shares blame for the violence that has claimed more than 1,000 lives in Mexico so far this year.

"I feel very strongly that we have a co-responsibility," Clinton said.

Clinton's two day trip to Mexico - she visits Monterrey on Thursday - follows an announcement by the White House on Tuesday that it plans to stiffen security along its southern border by dispatching nearly 500 federal agents to the area, increasing intelligence gathering abilities and working more cooperatively with Mexican officials.

Speaking alongside Foreign Relations Secretary Patricia Espinosa, Clinton said the move showed that Washington is serious about helping Mexico in its fight against the cartels.

"We will stand shoulder-to-shoulder with you," she told Espinosa. "The criminals and kingpins spreading violence are trying to corrode the foundations of law, order, friendship and trust between us that support our continent. They will fail."

Espinosa, who introduced Clinton as "a close friend of Mexico," said that "deepening" of the Mérida Initiative, a U.S. aid package for Mexico's fight against organized crime, was a top priority.

Clinton also said that the two neighbors were making progress in resolving a trade dispute that erupted after the United States banned Mexican trucks from its interior, and that the Obama administration hoped to achieve comprehensive immigration reform in the coming months.