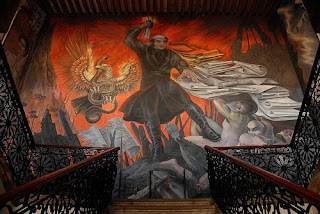 They also feted a revolutionary hero, Father Miguel Hidalgo Costilla, with re-enactments of the "grito," his 1810 call for independence from Spanish rule.

But the celebrations ushered in controversy for Catholic officials, who have been attempting to clarify the church's role in the historical event that was ignited by Father Hidalgo's fiery sermon but staunchly opposed by the church hierarchy of the day.

Various dioceses have published editorials and pronouncements on the independence movement. The Mexican bishops' conference, meanwhile, has established a commission for both the bicentennial and centennial. The bishops also sponsored a September conference on the church's role in the independence movement, which pitted the indigenous and mestizo populations, along with "criollos" -- Mexicans of Spanish origin, but born in the New World -- against the reigning Spanish-born elite known as "peninsulares."

The peninsulares, according to historians, were supported by the Catholic hierarchy of the day, although an especially terse editorial by Cardinal Juan Sandoval Iniguez of Guadalajara sought to dispel views that Catholics were entirely against the independence movement.

"Mexico always has suffered from a false official history that presents people and events in black and white, when, in everything, there are nuances," Cardinal Sandoval said Sept. 20 in an editorial published by Semanario, an Archdiocese of Guadalajara publication.

"Enemies of the church have wanted ... to obscure the merit of more than 400 priests that took up arms at that time to fight for independence," he wrote.

The various statements have been especially forceful regarding Father Hidalgo, a national icon, whose face adorns bank notes and whose name is given to roadways across the country.

The excommunications of Father Hidalgo and Father Jose Maria Morelos, a fellow independence leader, have provoked controversy for nearly two centuries and have been a source of friction between the church and the nation's political and intellectual elites.

The most recent controversy over Father Hidalgo was provoked by the Mexico City Archdiocese's response to a request from a congressional commission responsible for organizing bicentennial activities. The commission had asked for the intervention of Cardinal Norberto Rivera Carrera of Mexico City in petitioning the Vatican for the removal of the independence heroes' excommunications. The archdiocese issued a public response Aug. 28 on its Web site that said such a request was impossible because neither man had been properly excommunicated.

The excommunications were invalid, according to archdiocesan archivist Father Gustavo Watson and other church officials, because it was carried out by Manuel Abad Queipo, bishop-designate of Michoacan, who lacked the authority to do so and whose title of bishop was never confirmed by the Vatican.

Additionally, church records show that Father Hidalgo confessed in a Chihuahua convent before dying, was given the sacraments by Franciscan brothers and was buried in a church cemetery. Father Morelos also confessed prior to his 1815 execution, Father Watson said.

"They died inside the Catholic Church and died as priests," Father Watson said. "Therefore, there's no reason to ask that the excommunication be lifted."

Despite the statements and release of new evidence, attempts to change minds could prove difficult. Mexican textbooks teach that the two priests were excommunicated for their activities, although Public Education Secretary Alonso Lujambio told reporters in September that possible revisions would "be studied."

Some historians, meanwhile, accuse the church of trying to revise history and rehabilitate its image in the prelude to the bicentennial.

Political historian Ilan Semo of the Jesuit-run Universidad Iberoamericano in Mexico City concurred that Fathers Hidalgo and Morelos did not die excommunicated, but said church officials were being selective in their historical interpretations.

"The church opposed the independence movement," Semo said. "There were isolated priests in support ... but the hierarchy was against it."

Church officials, however, have called for wiping the slate clean and moving forward.

"Let us not be prisoners of the past," said Archbishop Alberto Suarez Inda of Morelia, president of the bishops' conference's commission on the centennial and bicentennial, told participants at a September forum, "The Church and Independence."

"Let us learn from the path of forgiveness and the purification of memories (so that) the evils of yesteryear don't nourish the hatred that continues doing damage ... and, above all, are not repeated."