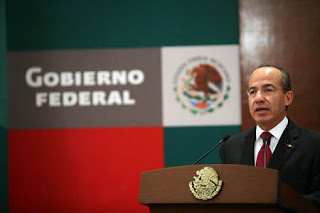 President Felipe Calderón unveiled a proposal on Dec. 15 for staging run-offs in future presidential elections. The process would pit the two biggest vote-winners in a run-off election to determine a clear victor - and presumably avoid a rerun of the narrow 2006 presidential contest, when Calderón narrowly won by less than a single percentage point and the scorned runner-up, Andrés Manuel López Obrador, derided the process as rigged.

The president unveiled the proposal as part of a 10-point plan for overhauling an oft-maligned political system that is dominated by powerful political parties and, according to some observers, run by an irresponsible political class that lacks both professionalism and accountability to voters.

The 10-point plan fulfilled a promise made earlier this fall to advance reforms such as the reelection of legislators and mayors, introduce the possibility of holding referendums and allowing for the election of independent candidates.

Calderón's proposals include those ideas, but, if the version he sent to Congress is approved, it would also eliminate the Senate seats distributed through proportional representation and reduce the number of seats in the Chamber of Deputies by 25 percent.

Other proposals call for allowing citizens and the Supreme Court to propose laws and creating a mechanism for the president to critique legislation already approved by Congress before signing it into law. (Torreón-based writer Patrick Corcoran of the Gancho blog compares this to a version of the line-item veto.)

One proposal could potentially imperil the nation's minor political parties - the Green Party, Labor Party, Convergence party and New Alliance - by raising the minimum-vote threshold necessary for them to maintain their registrations with the Federal Electoral Institute from two percent to four percent.

Opposition lawmakers greeted the president's plan with muted enthusiasm. Senate president Carlos Navarrete of the Democratic Revolution Party (PRD) groused about the president sending the plan to Congress on the final day of the ordinary sessions. (The permanent commission of Congress begins sitting next week.)

"The president likes to wait until the minute and send it in a nick of time, well, he needs to understand that Congress will take its time evaluating the proposals," he told reporters.

Navarrete - described in news reports as being "bothered" by the president's timing - said debate would likely begin in February.

The Institutional Revolutionary Party (PRI), meanwhile, questioned the president's motives and timing and suggested that Calderón was pursuing diversionary tactics.

"It seems that this change of direction comes after the adverse and precarious results with which the executive arrives at the second half of its government ... in the economic and security matters that were its priorities" said PRI Sen. Pedro Joaquín Coldwell, president of the constitutional points committee.

Still, some in the PRI appeared open to holding discussions with the president, although Coldwell raised the possibility of his party pursuing other reforms such as an overhaul of the presidency itself and giving Congress more of a role in vetting presidential appointments. (PRI heavyweight, Sen. Manlio Fabio Beltrones has long called for creating a "cabinet chief" position, while Coldwell said the PRI wanted to end the "cronyism" in Calderón's cabinet selections.)

State of Mexico Gov. Enrique Peña Nieto appeared even more cautious that his Senate counterparts. He told reporters that he opposed reelection for historical reasons that go back to the national mythology that constant reelection during the rein of Former President Porfirio Díaz provoked social unrest and led to the Revolution.

Peña Nieto, an early favority for the 2012 PRI presidential nomination, previously has said that he instead favours extending legislative and mayoral terms from three years to four years. His support for any proposals could be key as he reputedly wields enormous influence over the roughly 40 PRI lower-house lawmakers from his home state.

For his part, López Obrador blasted the Calderón proposal for a run-off election. In a Twitter posting, he said, "The mafia want a run-off in the elections. They think that with Televisa and their two parties [PAN and PRI], they're going to keep themselves in power forever."

Calderón and López Obrador both claimed 35 percent of the 2006 popular vote; most analysts say that a run-off would have undoubtably gone in favor of the PAN.

On point ten, is that just a budgetary veto? The explanation I read was a bit confusing.

This is potentially huge news!!!

Did you sneak in and out on Sunday? I couldn't find you...