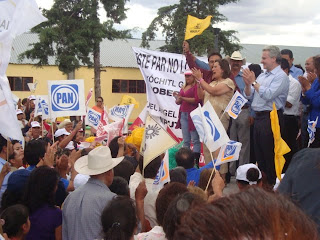 Xóchitl Gálvez, the PAN-PRD gubernatorial candidate in Hidalgo, awarded 10,000 pesos yesterday to the video best purporting to show irregularities in the July 4 state election, which the PRI won by a five-point margin - much closer than expected and especially close given the state government's backing of the PRI campaign. The Gálvez campaign has raised allegations of irregularities that range from vote buying to the police raiding one of her campaign buildings on election day to the PRI governor of the neighbouring State of Mexico sending in trailer-loads of giveaways for plying voters.

The award stunt was the latest action in her attempt to have the election overturned - something that hasn't happened on the state level since the electoral tribunal (Trife) overturned the 2003 election in Colima state. (Ironically, a 2008 municipal election was overturned in Zimapán, Hidalgo, site of a proposed toxic waste dump after the pro-dump PRI complained that the local priest had preached politics by the pulpit by voicing opposition to the project in his election day homily.)

Her odds of success in overturning the election are uncertain, but Gálvez has emerged from the July 4 elections as one of the nation's rising political stars.

The Gálvez campaign confronted an electoral machine operated by one of the most retrograde PRI state governments in the country - a place where the governor went so far as to change the state anthem to something glorifying the PRI and state media outlets, which are considered friendly to the PRI and, no doubt, dependent on state government advertising, gave the PRI campaign five times the coverage it gave her. She received less support and publicity from her own party backers than was given to similar coalitions running in Oaxaca and Puebla. Gálvez went so far as to remove her family from the state on the eve of the elections and mentioned having some campaign members threatened by Los Zetas.

She even had to deal with a scorned Andrés Manuel López Obrador, who demand the Labour Party (PT) pull out of any coalitions in Hidalgo because of her presumed closeness with former president Vicente Fox (in whose administration she served as commissioner of the Indigenous Communities Development Commission).

Whether or not she wins in the tribunals, Gálvez - who is not a member of any political party - has emerged as one of the political stars of the July 4 elections and should be factor in Mexican politics over the coming years.
Posted by David Agren at 09:29

Email ThisBlogThis!Share to TwitterShare to FacebookShare to Pinterest
Labels: Hidalgo