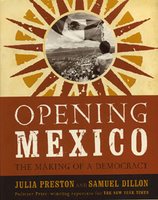 Young National Action Party (PAN) supporters, celebrating the country's historic vote to cast aside one-party rule at Mexico City's Angel de la Independencia on election night 2000, admonished president-elect Vicente Fox, "No nos falles" (don't let us down). Julia Preston and Samuel Dillon end their book "Opening Mexico" with an account of the scene, perhaps setting the stage for a sequel about the Fox administration, which came to power on a platform of change, but largely dashed expectations.

Their current book, however, brilliantly chronicles the long and torturous road to the point when Mexico became democratic. The book methodically highlights the key events and characters of the struggle, effectively explains the Institutional Revolutionary Party (PRI) system of governance and offers insights into the prevalent attitudes during the decades of one-party rule. The pair filled 516 pages, making "Opening Mexico" a lengthy read, but it's perhaps appropriate, considering that Mexico's fledgling democracy came about gradually.

The book opens and ends with the 2000 election, but the authors peg 1968, the year the federal government violently quelled student protests in Tlatelolco, as their starting point. Perhaps, though, the 1985 Mexico City earthquake, which claimed more than 20,000 lives would be a more appropriate place to begin. The earthquake revealed PRI ineptness and the governing party's callous nature, but on a positive note, the disaster fomented the development of a civil society. Frustrated by a lack of government action, citizens took matters into their own hands, digging through rubble to rescue survivors, while soldiers and police officers stood idly by. Prior to 1985, the PRI system discouraged individual initiative; a top-down management style pervaded all sectors of society.

Homero Aridjis, president of Grupo de los Cien Internacional, a group of intellectuals who advance environmental issues, described the reaction to his organization: "It was a group where people participated voluntarily. The government couldn't figure that out. They couldn't understand the idea of volunteer work or disinterested civic action." (Read Alan Riding's "Distant Neighbors," for a more thorough assessment of Mexican history and society.)

Mexico's press, previously held hostage by political patrons and a government-run newsprint vendor, slowly flowered thereafter, as new newspapers - most notably Siglo 21 (the predecessor to Guadalajara's Publico) - displayed growing editorial freedom. (The pages in "Opening Mexico" describing the history of Siglo 21, which made its name with its intrepid reporting on the April 22, 1992 pipeline explosion in Guadalajara, need to be read by anyone wanting to better understand the derelict nature of Mexico's press in past years).

The earthquake also laid the groundwork for the PRI's near defeat in 1988. Cuauhtemoc Cardenas, the son of a former president, capitalized on immense dissatisfaction in the country, but due in part to a mysterious computer crash at the election headquarters, he lost to Carlos Salinas. Cardenas founded the Democratic Revolution Party (PRD) afterwards and the new entity would become the dominant force in the Federal District.

Preston and Dillon, both former New York Times correspondents in Mexico during the late 1990s, focus heavily on the regimes of Salinas and Ernesto Zedillo - in addition to Carlos Salinas' "hermano incomodo" (uncomfortable brother) Raul. (Raul Salinas, charged with murder, sent the authors letters, protesting his innocence. After a decade in prison, Raul Salinas was released - without ever being convicted. Questions about suspicious foreign bank accounts remain.)

"Opening Mexico" recounts many of the calamitous events of the 1990s, but not in the same detail as Andres Oppenheimer's "Bordering on Chaos", which effectively spelled out the details of the 1994 peso crisis, the EZLN uprising in Chiapas and the murder of Carlos Salinas' chosen successor Luis Donaldo Colosio.

The "Opening Mexico" authors cast Zedillo, the "accidental president," in a hero's role. Although imperfect, Zedillo ushered in many of the reforms necessary for Fox's victory. The former president also locked horns with PRI dinosaurs (the term for old-school party operatives). While former PRI presidents and interior ministers regularly overturned opposition victories in state elections (most notably in Chihuahua in 1986 and San Luis Potosi in 1991, events the authors devote entire chapters to), Zedillo recognized unfavorable polls against his party, instituted primary campaigns and strengthened the Federal Electoral Institute (IFE).

Most effectively though, "Opening Mexico" deftly captures the spirit of the 2000 election and recounts small details of the campaign. Fox, a former Guanajuato governor, who peppered his campaign speeches and interviews with cuss words (he once told a newswire: "I'm honest, I work like a mother------ and I'm not an asshole,") and his team turned the election into a referendum on 71 years of PRI rule. They coined the slogan: ¡Ya! (loosely translated as now, or enough). A two-letter word became a rallying cry for change.

The PRI stumbled in a fair election, depending initially on the advice of several Clinton strategists, who imported the slogan, "Power to the people," which didn’t translate well into Spanish. The PRI eventually dumped the slogan along with its attempts to rebrand itself, "The new PRI."

Since the book was published several years after Fox took power, the authors' epilogue is especially telling. The tone of writing describes the widespread disappointment in Fox's reign better than any of the details about things not changing.

The epilogue ends with the sentences: "Mexico had seemed the perfect dictatorship. Now it was an imperfect democracy."

The 2006 elections will test if democracy has taken root. Regardless of the outcome, Mexican democracy will continue to be a work in progress for years to come.

From the Guadalajara Colony Reporter
Posted by David Agren at 14:17