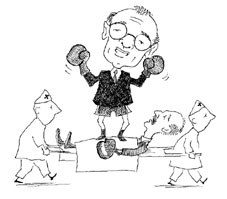 The hype leading up to Mexico's first presidential debate on Tuesday focused on a potentially empty lectern, which Democratic Revolution Party (PRD) candidate Andres Manuel Lopez Obrador, the long-time campaign frontrunner, kept declining to stand behind. Despite being branded a coward, the self-described frontrunner and target of a spate of negative National Action Party ads declined to participate. His reason: They're all going to 'attack me.'

The debate proceeded without Lopez Obrador. Surprisingly, the PRD candidate's absence barely drew attention, spare the moderator's comments: "Andres Manuel Lopez Obrador of the Alliance for the Good of All decided not to participate," and the appearance of an empty lectern on stage.

Calderon and the three other presidential hopefuls, Roberto Madrazo of the Institutional Revolutionary Party (PRI), the New Alliance's Roberto Campa, and Patricia Mercado of the Social Democratic and Farmers' Alternative, outlined their economic proposals in the debate, which was at times testy, but featured little direct verbal sparring.

Each candidate entered the debate with his or her own objectives: Calderon, to establish himself as the main challenger to Lopez Obrador.

(Several recent polls put the race in a dead heat.) Madrazo, to escape third place and increasing irrelevance. Campa and Mercado, to make a name for themselves and their fledgling parties. Two candidates succeeded, although all claimed success afterwards.

Madrazo, dressed in a classic power suit with white shirt and red tie, zeroed in on Calderon from the get go. The former Tabasco governor branded Calderon, "The candidate of lost opportunities," a reference to the PAN aspirant's tenures as energy secretary and a federal diputado. In virtually every salvo, Madrazo, constantly glancing at notes but speaking firmly, opened with the impolite salutation, "Calderon." In several retorts, he disparagingly said, "Calderon, don't disguise the reality."

The PRI candidate spelled out little policy, except promises to improve Pemex through what he termed, "Modern nationalism," and simplify tramites (bureaucratic procedures) He also expressed solidarity with Mexico's sindicatos (unions that often functioned as party surrogates) and blamed the PAN government for the recent strike violence in Michoacan. Mostly, though, Madrazo attacked the PAN and mocked President Vicente Fox's oft-run TV spots, saying acerbically, "If we keep following this road, we won't even arrive in the second division."

Calderon, in comparison, looked jovial, wore a dark suit with a cheery striped tie and spoke in an upbeat, non-threatening tone. Unlike Madrazo, he often grinned. He doled out as much as he received, but in a less ominous manner. After Madrazo accused the panista of receiving an improper loan, Calderon flashed a photo of a Miami penthouse apartment supposedly owned by the PRI candidate. Calderon mainly promised a potpourri of things - not unlike the PRD campaign has been accused of doing - during his allotted time: Lower taxes, banning employment discrimination against pregnant women and opening daycare spots for working mothers.

As the only woman in the debate, Patricia Mercado advanced issues the other male-lead campaigns mostly overlooked: gay rights, access to abortion and gender issues. She summed up her views with the statement, "Inequality is more profound than poverty." The candidate also differentiated herself from the PRD and Lopez Obrador, identifying her politics with those of left-wing governments in Chile and Spain.

Mercado's new party must capture at least two percent of the vote in order to run again in future elections. A strong performance helped her cause.

Roberto Campa on the other hand looked out of place, although he made the understatement of the night, "It's difficult for a new party to win the presidency." His performance made that task even tougher. The scowling candidate spoke with a jerky cadence and gestured awkwardly. Mostly, though, he repeatedly attacked Madrazo, the man who kneecapped Elba Esther Gordillo - Campa's ally in the teachers' union - during her tenure as a PRI vice president. Most contentiously, Campa charged Madrazo with evading taxes, brandishing an SAT (revenue department) document to supposedly prove his point.

All of the candidates claimed victory after the debate. Lopez Obrador said the debate had no impact on his campaign. He later rolled out vaguely familiar conspiracy charges, alleging that two unfavorable polls released on Tuesday were just slick marketing.

Analysts were split on how Lopez Obrador's absence will impact the campaign. Most commentators in Mexico's large dailies lauded

Calderon and Mercado's performances and scorned Madrazo and Campa.

From the Guadalajara Colony Reporter.
Posted by David Agren at 15:39