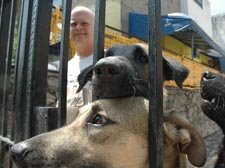 Lawrence Gerard cares for 95 abandoned dogs at his house on Calle Libertad in Guadalajara. Due to fears the city will seize and “kill” the dogs, he seldom leaves his home.

Lawrence Gerard wades through a sea of barking dogs to answer a knock at his front
gate, which fronts Calle Libertad and the U.S. Consulate General in Guadalajara.

“See how clean that is,” he said proudly, pointing towards a cement patio with a statue of Saint Francis de Assisi, where a young man recently finished scrubbing.

Gerard, a retired priest from New York, houses 95 abandoned dogs at his humble abode. Despite his efforts to keep his property clean, the growing dog population – and the resulting noise and odors – sparked a feud with several nearby building owners and restaurateurs, who blame the animals for driving away sales and making their properties unattractive to potential renters. Three neighbors sued Gerard – one allegedly uttered a death threat – and the municipal government has dropped off an endless stream of multas (fines). His long-time landlord recently issued an eviction notice, ordering Gerard and the dogs to leave by August.

“I’m not getting rid of the dogs,” Gerard said defiantly. “I can’t just throw them out into the street.”

Caring for abandoned dogs consumes Gerard’s retirement and modest income, which he supplements by selling vestments. He pays out-of-pocket to have each bitch spayed and every dog receives vaccinations. He orders 750 pounds of dog food every 15 days, which is delivered to his home. Due to fears the city will seize and “kill” the dogs, he seldom leaves his home. When he ventures out, he locks all the dogs inside. (The big dogs spend the day outside, while the small dogs live inside. All the dogs sleep in the house).

“When I get back, the house is a little messed up,” he admitted.

Gerard’s legal problems date back to last year, when in his words, “Three neighbors got together in a conspiracy to sue me ... to get rid of the dogs.”

He won the case, but lost an appeal. Gerard’s lawyer is now taking the case to federal court.

“We’re going to say this block isn’t a residential area,” he explained.

Offices and small restaurants line the street. Several of the buildings are vacant. Gerard said his neighbor, an absentee owner, blames the dogs for driving away potential tenants, “But the fact is it’s a run-down dump.

The restaurant owner on the other side, “Threw dirty hot water at the dogs from the washing machine.”

Gerard insists the dogs only bark when provoked. Children passing by sometimes tease the canines.

“It’s always the fat kids,” he said. “They throw rocks and bottles at the dogs.”

The quarrels with his neighbors and city hall have taken a toll on Gerard’s health.
He sleeps poorly and suffers from stress.

“My nerves are shot,” he confessed, adding that he’s lost weight. “I fear for the lives of the dogs and my own life too.

If evicted in August, Gerard said he has few options.

“I have no money to move,” he said. “I need a big place with lots of land and no neighbors.”

Sending the dogs to the municipal pound is out of the question. Most of the canines were rescued from the street. Others were dumped in his yard. Gerard posted a sign last year to encourage adoptions, but it instead prompted owners to bring by unwanted dogs.

“People dump dogs in the middle of the night,” he said. “Someone dropped off a box of eight puppies at one time.”

Gerard also rescues dogs from the street. He points to a small black-and-white mutt called Cookie Gittleman – named for a customer – that he “took away from a drunk in the street.”

Another mutt named Scooter simply showed up at the front gate.

“He walked in like he owned the place,” Gerard said. “He’s a real gentle dog.”

Gerard has found eight homes for his dogs in recent months, but needs more willing owners. He charges 200 pesos, which offsets the cost of the vaccinations.

“If they can’t afford the vaccinations, they won’t look after the dog,” he explained.

And despite his struggles, he promises to keep fighting.

“It’s going to get ugly if (the city) comes for the dogs.”

From the Guadalajara Reporter
Posted by David Agren at 13:40

What new developments have surged since this article was released? How do you deal with this situation? I really sympathize with the guardian of these dogs. It seems to me that this should not just be his moral and legal battle alone.

Gerard lost an appeal and moved the dogs. He then had an issue at the temporary location with neighbors and now the dogs are somewhere out of town - which he said wasn't the greatest but he had no other choice - and are being looked after. He's actively looking for a new place to live too.

Is your neighbor's noisy dog getting you down? Too much barking? Post it here at the Barking Dog ATLAS.