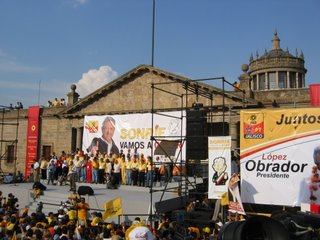 ANALYSIS from the Guadalajara Reporter

Democratic Revolution Party (PRD) candidate Andres Manuel Lopez Obrador closed the Jalisco portion of his campaign last Saturday in front of an overflow crowd of at least 10,000 supporters clad in yellow and green (the latter being fans who watched Mexico's World Cup match earlier that afternoon) – an audience estimated to be five times larger than his predecessor Cuauhtemoc Cardenas attracted in 2000 for a similar event. The PRD aspirant outlined his economic platform, which emphasizes subsidies to poor households, price supports and massive investments in refineries for Pemex and bullet trains from Mexico city to the hinterlands – all without raising taxes. Above all, though, it represented a departure from the macroeconomic path charted by presidents Fox and Zedillo.

"We don't have to put the country in debt or raise taxes," he told the crowd.

"To say this is populism is an exaggeration."

The proposals drew rave reviews from the sympathetic audience, but jeers from many analysts, who compared it to something out of the 1970s, a decade of economic turbulence in Mexico.

"His economic program is just funny money," said George Grayson, a government professor at the College of William and Mary in Virginia, who penned a book on Lopez Obrador titled: "Mesias Mexicano" (Mexican Messiah).

"His 50 promises could have been [former president Luis] Echeverria's platform 30 years ago."

Echeverria, who governed from 1970-1976, castigated business owners and implemented spending programs that led to a sharp peso crash and high inflation. President Vicente Fox has been perceived as not having implemented change in Mexico, but interest rates and inflation are both at seldom-seen low levels and economic growth has recently accelerated. The jobless rate remains stubbornly high, however, and many Mexicans don't have bank accounts or jobs in the formal economy and are thus unable to use financial instruments that would allow them to take advantage of the stable macroeconomic climate.

Mural columnist Sergio Sarmiento was also among the skeptics of Lopez Obrador's proposals, especially the PRD plan to boost incomes of families earning less than 9,000 pesos per month by 20 percent. He politely pointed out, "The last time we had something like this was in 1982, when [former president] Jose Lopez Portillo ordered a 30 percent increase in salaries, which produced a subsequent economic collapse."

The Federal Electricity Commission (CFE) released figures to the El Economista newspaper that estimated a 10 percent cut in power prices – something the PRD promises to do - would cost two billion pesos. Pemex, which remits more than 60 percent of its earnings to the federal government, lacks funds to build new infrastructure – something Lopez Obrador wants to see happen without private-sector participation.

"The era of privatization is over," he said last Saturday.

Lopez Obrador intends to finance the spending by improving tax collection – in a country where tax evasion is rife – and slashing the cost of government. The latter proposal could prove difficult as many public-sector unions now support the PRD instead of the Institutional Revolutionary Party (PRI).

Bernardo de Leon, an architect in Guadalajara, bought into the PRD proposals, saying, "I live well, but I'm not scared at all.

"The only people who are scared are all those panistas (National Action Party supporters)."
Posted by David Agren at 17:13