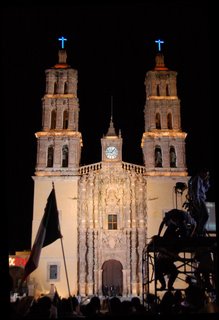 Due to a possible conflict with PRD supporters, President Vicente Fox will deliver the traditional Independence Day grito (shout) in Dolores Hidalgo, Guanajuato instead of at Mexico City's Palacio Nacional, ceding the grito's usual location to disgruntled candidate Andres Manuel Lopez Obrador, who had already planned on usurping Fox by staging his own grito. (Mexican independence started in Dolores Hidalgo in 1810.)

Once again Fox folded in the face of potential conflict, something not lost on his detractors. So far this summer, he failed to act when protesters took over central Mexico City; he failed do anything in Oaxaca, where the teachers' strike has morphed into anarchy; and now, he's leaving town on the eve of Lopez Obrador's democracy summit, where the left-leaning former mayor of Mexico City is expected to be named the "legitimate president" of Mexico. (The summit takes place this weekend after the military parade moves through the Zocalo.)

Fox, a former Guanajuato governor, should have already delivered the grito in Dolores Hidalgo by now, following the tradition that presidents go to the self-described "cradle of independence" at least once during their mandate. But going now - just as Lopez Obrador's inner circle advised the president to do? (Lopez Obrador hasn't even received his "legitimate president" designation and he's already imposing on the current, elected president.)

So now what? The informe was scrubbed due to a revolt by PRD legislators. (Fox gave it via television.) President elect Felipe Calderon has kept an extremely low profile - perhaps out of necessity. And now the grito goes to Dolores Hidalgo. Will Calderon's swearing-in ceremony be moved too? It seems very likely - despite PAN comments to the contrary.

Update: This AP story explains some of the reasoning behind Fox heading for Dolores Hidalgo and the deal struck with Lopez Obrador by the interior ministry.
Posted by David Agren at 16:32