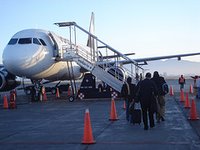 I escaped the Federal District yesterday morning on a Volaris flight, taking advantage of one of Mexico's new discount airlines. Even though the flight departed from Toluca, 70 km to the west, the whole process was just as easy - but much cheaper - than going from the main Mexico City airport. (Finding an available taxi in the Colonia Roma at 5 a.m. was another matter.)

My one-way flight to Guadalajara cost less than 600 pesos - about the same as a first class bus ticket on ETN. Everything was top notch - especially the lattes served in the Toluca airport - and Volaris provides many nice touches like free cajeta snacks upon deplaning. The Pinguinos (Mexican version of a twinkie) served for breakfast were a little disappointing, but that's about all.
Posted by David Agren at 13:50