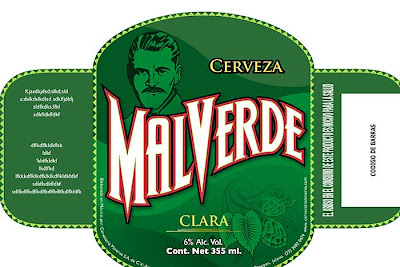 Jesus Malverde inspires an odd following; he's better known as the patron saint of narcos. He's also fairly popular in Sinaloa, a state notorious for narcotics trafficking, but lately he's been creeping into the country's broader popular culture. In Mexico City's trendy Condesa neighborhood, a bar named for the unofficial saint opened recently. And now Cerveceria Minerva, a Zapopan-based microbrewery just registered the label: Malverde. There's nothing like cashing in on the cachet of a notorious figure, something Minerva's head brewer acknowledged in an interview with the Mural newspaper.

Cerveceria Minervia makes great craft beer - something rare in Mexico, where the big two breweries have a stranglehold on the market and hawk rather watery suds. Thus, this offering should be good - even if the name is a bit naco.
Posted by David Agren at 08:58

Email ThisBlogThis!Share to TwitterShare to FacebookShare to Pinterest
Labels: booze

And, if the label is correct, 6% alcohol makes it the strongest, most alcoholic beer in México. I'm surprised, as I have always thought that beer in México had to be LESS than 6% alcohol.