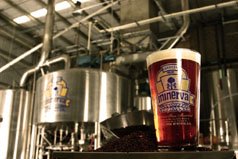 Jesus BriseÃ±o never especially liked the watery mass-market beers sold in most Guadalajara bars. During trips abroad, he discovered craft beers, freshly-made ales, stouts and lagers that were packed with subtle, but interesting flavors and usually drawn from a keg. He later started making his own beer at home before studying to become a brew master in the United States. Nowadays he brews beer for Zapopan-based Cerveceria Minerva in small batches, putting it into kegs so customers can buy it by the pint in local bars and restaurants.

Small breweries like Cerveceria Minerva flourish in Canada and the United States, where a thirst for craft beers has created a sizeable market niche and stolen sales from large conventional producers. In Mexico, however, two large breweries, Grupo Modelo, the maker of Corona, Estrella and Modelo, and Cerveceria Cuauhtemoc Moctezuma, which sells Sol, Indio and Tecate, dominate the market, forming a virtual duopoly, which the companies jealously protect. Furthermore, the country lacks a tradition of premium beer consumption; fewer than five microbreweries operate in the Republic. Most Mexican beers lack a distinctive flavor and are almost always sold in bottles.

'Our slogan is: 'Cerveza Minerva, it's not just a beer, it's culture,' ' BriseÃ±o said, adding the company hopes to gradually change the way Mexicans view beer. 'We're trying to establish a culture of drinking premium beers.'

Cerveceria Minerva jumped into the brewing fray somewhat quietly during the summer of 2003. A group of six owners, which included BriseÃ±o, opened Tierra de Malta, a brewpub on Avenida Ruben Dario, selling beer made on site.
'It used to sell a lot of beer,' BriseÃ±o recalled.

'But that's all that it sold.'

Deciding they were better brewers than restaurateurs, the group sold a stake in Tierra de Malta to Salute, a Mexico City chain, after one year in business, but kept the beer-making equipment in place. They later imported additional beer-making equipment, purchasing the assets of a distressed brewer in Philadelphia for a bargain, and set up a brewery in a Zapopan industrial park. The Salute location still produces some of Cerveceria Minerva's volume.

Although not the most successful of ventures, the restaurant proved a taste for craft beer existed in Guadalajara. Cerveceria Minerva now sells four different beers in approximately 20 Guadalajara-area restaurants and bars along with a few establishments in Mexico City and Queretaro.

It brews two beers year round: Viena, an amber lager and Colonial, a golden pale ale. It also makes a Dunkelweissen, a 'dark wheat beer,' which is exclusively sold at the Red Pub in Guadalajara, and four seasonal varieties. During the fall of 2005, it's offering Luna Llena (Full Moon), a cream stout, which BriseÃ±o described as 'like a Guinness, but not dry.'

Cerveceria Minervia uses premium ingredients, importing its hops and barley. Although Mexican malt is available, BriseÃ±o said the big two breweries have cornered the market. The Zapopan brewery also purifies its own water.

Sales growth has averaged 15 percent per month since the new brewery opened and Cerveceria Minerva recently unveiled plans for bottling its product. The first six packs should hit store shelves in February.

'Our biggest problem has been exclusivity contracts,' Orozco said.

Alejandro Perez, manager of the Red Bar, pulls pints of Cerveza Minerva at his English-style pub, which also offers a wide selection of imported brews and, of course, Grupo Modelo products. He said Group Modelo representatives offered him a kickback worth 10 percent of the bar's beer sales if he signed an agreement, but he declined, saying most of his customers come looking for imports and microbrews.

Further complicating matters for Cerveceria Minerva, the federal Congress Â– at the urging of Mexico's two big breweries Â– will impose a new environmental tax on all non-returnable beer containers in the new year. The law doesn't affect soft drink and water bottlers that use similar containers. It could make Grupo Modelo and Cerveceria Cuauhtemoc Moctezuma's products cheaper in comparison to the rash of inexpensive imports and craft beers flooding the Mexican market. The two large breweries already have networks for retrieving and washing bottles. If implemented, Orozco said the tax could drive up Cerveceria Minerva's retail prices by as much as 30 percent.

'It's not just a problem that affects us,' Orozco explained. 'It also affects all other foreign beers.'

'You can keep growing into a new market Â– or just stay stuck,' he said.

And with any luck, the upstart brewer will survive the tax, the exclusivity contracts and the lack of beer appreciation and just maybe 'become a threat to the big guys.

From the Guadalajara Colony Reporter
Posted by David Agren at 16:47

Happen to know the address of the Minerva website?