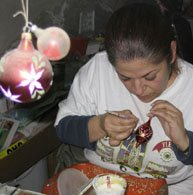 Open cardboard boxes loaded with shimmering ornaments, which are easily visible from the sidewalk, suggest happiness and joy. But the present economic reality for Sorpresas en Artes Navideñas (SeAN), a glass-ornament manufacturer in San Julian, Jalisco, brings little cheer for its manager and his dwindling number of employees. Stiff foreign competition has jeopardized the future of their industry, flooding the Mexican and export markets with poor-quality knockoffs that sell for a fraction of the price.

"The Asian factories have hit us hard," said Guillermo Gonzalez Mata, the plant manager. "We can't compete on price."

SeAN used to ship a trailer-load of ornaments to the United States each month. This year, it failed to fill a single trailer. Asian factories churn out identical merchandise for a fraction of the price. It often shows up in Mexican street markets, but also in supermarkets and department stores. SeAN manufactured 500,000 ornaments for the 2005 Christmas season. Unlike many of its competitors, its employees produced each piece by hand, giving each ornament a unique one-of-a-kind luster.

The ornament-making process takes 25 minutes from start to finish. Each piece starts out as narrow tube of glass, which is then cut according to the size of the ornament. The pieces are blown into the appropriate shape. The shiny pieces are metalicized while the frosted items are exposed to oxygen gas. After being formed into globes, ovals and teardrops, the pieces are painted. Some pieces like the miniature Santas, bells and toy soldiers, come from moulds. Finally, a small army of detailers hand-paint most of the ornaments.

After outlining the labor-intensive process, Gonzalez observed, "The quality of the Chinese merchandise is poor."

But China has stolen market share away from San Julian's factories, leading to job losses. One factory on the outskirts of the Los Altos-region town closed last year while another produced even fewer ornaments than SeAN did. Three years ago, SeAN employed 100 people, who designed, manufactured, decorated and packaged the ornaments. This year it only hired 22. The town, famous for its dairy industry, increasingly survives on remittances sent home by migrants.

"There's not a single family in San Julian that doesn't have at least one member in the United States," Gonzalez said.

With the export market drying up, SeAN focused more on selling its goods in Mexico.

"We sold more here [this year] because we can't compete with the Chinese," he added.

The factory snagged several private-label contracts, including one from the Transportation and Communications Secretariat (SCT). SeAN decorators hand-paint the government agency's logo on three types of ornaments. The company also boxed sets of premium ornaments, which require attention to detail the Chinese factories can't match. Glass ornaments adorn fewer trees with each passing Christmas, although some Americans prefer the traditional decorations to the now-ubiquitous plastic offerings. Antiques dealers scour Mexican pueblos, looking for the classy, if less-refined, ornaments from factories like SeAN.

Andrea Hernandez, a nine-year veteran employee of the San Julian plant, which is 150 kilometers northeast of Guadalajara, said most of SeAN's retail customers come looking for something original.

"There's a lot of outside competition, but there are still people who like to keep traditions. ... There are people who value our work," she explained. "It's artesania because it's all done by hand."

Susanna Kirchberg, a Guadalajara folk art dealer, said glass ornaments are highly sought after, but in general, "It's a dying art."

Guillermo Gonzalez Mata didn't know what fate awaited his factory – or if it would even operate in the coming years – simply saying, "In our case, it all depends on the owner."

From the Guadalajara Colony Reporter
Posted by David Agren at 19:17