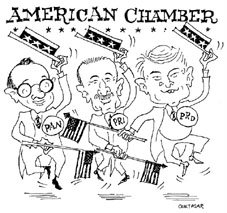 The country's three top presidential contenders outlined their economic platforms for delegates attending the American Chamber's annual convention in Mexico City last Tuesday, but undoubtedly many in the business-minded audience came looking for information from only one of the men: Andres Manuel Lopez Obrador of the Democratic Revolutionary Party (PRD), the left-leaning frontrunner in the race for Los Pinos (the president's residence).

The American Chamber, an organization that represents more than 100 billion dollars of foreign investment in Mexico, organized the candidates' meeting to enlighten its members on the country's investment climate and future political landscape. The event marked the first time the three presidential aspirants spoke at the same event in the election campaign.

"We were excited to be the first to get all three [candidates] together," gushed Larry Rubin, CEO of the American Chamber, who is based in Mexico City. "It certainly wasn't easy."

And it certainly caught the attention of analysts. Jorge Fernandez Menendez grumbled in his Publico column that the leaders united for "Americans," instead of Mexicans, who will cast ballots next July. Rubin, however, pointed out that the American Chamber members make 85 percent of all foreign investments in Mexico. He added, "(The candidates) see foreign investment as important ... for their future governments."

With the country possibly lurching left, delegates pressed Lopez Obrador for answers. As the former Mexico City mayor led opinion polls throughout 2005, the Mexican stock market slumped and many companies, including Telmex, hedged their dollar-denominated debts.

Questions concerning energy sector reforms surfaced and staying consistent with his campaign rhetoric, Lopez Obrador ruled out the possibility of allowing private investment in both Pemex and the electricity market should he be elected.

"We're not going to ... privatize the electricity industry or the petroleum," he stated unequivocally, noting that the constitution forbids foreign involvement.

The PRD proposal calls for increased government investment in the petroleum industry and building new gasoline refineries. Pemex, though, funds much of the federal government's budget, leaving little money for exploration and maintenance. According to reports, Mexico could start importing petroleum within the next 10 years.

Felipe Calderon of the National Action Party (PAN) staked out the most liberal position, saying the country needed foreign expertise. He proposed forming "strategic alliances in the industry."

Former U.S. Ambassador to Mexico Jeffrey Davidow, the event moderator, observed in a question to Roberto Madrazo of the Institutional Revolutionary Party (PRI) that only Mexico and North Korea forbid private investment in the petroleum industry.
Madrazo, currently leading a struggling campaign, also proposed some liberalization in the energy sector. Both men advocated keeping government ownership of Pemex.

"There are so many opportunities in the energy sector," Rubin said, adding that Mexico is importing resources when much of the country's richness goes untapped.

On the whole, the PAN's Calderon called for the most ambitious structural reforms, which included a flat tax and a crackdown on piracy.

The PRI proposed some of the same things, but to a lesser degree.

Lopez Obrador, a political maverick whose exact policies were largely shrouded in mystery prior to the event, called for better tax collection, and opting out of some parts of NAFTA that dealt with agriculture.

But he acknowledged the need for continued foreign investment in Mexico, saying, "It can be a factor for the development of the country in other fields [other than petroleum and electricity]."

Other sectors needing reform include security, finance and labor, according to Rubin.

Most reform proposals have faltered during the first five years of President Vicente Fox's tenure; the president and congressional leaders have bickered frequently.

The American Chamber, a non-partisan organization, never endorses political candidates. Rubin said, "We can work with any candidate that is elected democratically."

The 88-year-old chamber represents approximately 2,000 companies in Mexico. Rubin estimated its Guadalajara branch, which turned 40 this year, serves 30 percent of the chamber's members.

From the Guadalajara Colony Reporter.
Posted by David Agren at 16:09