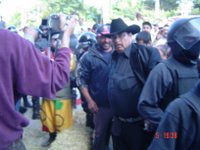 Andres Bermudez left Zacatecas state as an impoverished field hand in 1974. He and his pregnant wife sneaked across the border, hiding in the trunk of a car. After a short stint working in a suitcase factory, Bermudez began laboring in the fields of northern California. His luck changed after he invented a device for planting tomatoes. The new contraption quickly became popular among growers, earning Bermudez the nickname, "The Tomato King." It also earned him a small fortune. He returned to his hometown of Jerez, Zacatecas in 2001 as a celebrity, a migrant made good from a spot lacking opportunities — a place where much of the population survives on remittances sent home from the United States. He capitalized on his notoriety, capturing the popular vote in the 2001 mayor's race, but was subsequently denied office by election officials, who ruled that he failed to meet the state's residency requirements. After successfully lobbying for a change in the law, he won again in 2004, this time running under the banner of Zacatecas' least popular political party.

Bermudez's electoral feat and his incredible rags-to-riches story captured international headlines. Observers hailed his triumph as an example of migrants flexing their political muscles in the communities they have long propped up through remittances. The Tomato King promised to turn Jerez, a sleepy burg of 60,000 in the Central Mexican highlands, into a mini America, a well-governed place teeming with prosperity and most importantly jobs. And in a threat to the old guard, he vowed to "Get the rats out of city hall." Somewhat bizarrely, he also promised visas for young workers heading to the United States and tomato-planting devices for poor campesinos (peasant farmers), who have been abandoning the countryside in droves.

But with notoriety came controversy and enemies. Several journalists and opposition city councilors allege Bermudez has engaged in corruption, nepotism, and lewd behavior and governed in an authoritarian style — like a king — intimidating opponents and employing thugish tactics. Emotions about Bermudez —a polemic figure — run high. Many Jerez residents preferred not to make on-the-record comments about the mayor.

"He's not better or worse than any of his predecessors," said Alfredo Saldaña, owner of the Hotel Jardin in the Jerez centro. "But he has a lot more enemies."

Three members of Jerez's city council went on a hunger strike three weeks ago, demanding the state government take action against the mayor. Members of a Jerez citizens' group along with local residents opposed to Bermudez later barricaded the front doors to city hall for four days.

"A hunger strike is an extreme method," conceded Adriana Marquez Sanchez, a city councilor from the Workers' Party (PT), who went four days without food before falling ill. "It's a shout, saying, 'Enough.' It's a call for justice."

Marquez and her fellow hunger strikers allege the mayor spends municipal money recklessly on his own expenses, paying for a costly personal cellular phone, a junket to Las Vegas, flights between Zacatecas and California for his family members and a vehicle. Additionally, they accuse the mayor of turning the municipal police into "his own security force."

"The Bermudez supporters were paid to strike and attack us," Marquez contended. "The majority of (them) are employees who work inside city hall.

A visibly shaken Bermudez reclaimed his city hall office shortly after the protestors were dislodged. Surrounded by screaming supporters and a clown posing as a television reporter, the mayor broke down in tears. He later complained, "They won't leave me in peace," pounding a fist on his desk to emphasize the point.

Bermudez filed a denuncia (complaint to the local prosecutor) on Mexican press freedom day against Vanegas, who reports for Imagen, a Zacatecas daily newspaper. The complaint demanded she reveal the names of the women, who alleged the Tomato King was trading prostitutes for their husbands' votes.

"Since then, they haven't left me in peace," she said, adding she began receiving threats around the same time.

Shortly after Jerez city hall reopened, Vanegas said several men, who were brandishing knives, threatened her. After pleading for several hours with the local prosecutor's office, she was finally able to register a complaint.

Shortly after being introduced, the Tomato King suggested this single reporter get acquainted with a young executive assistant after inquiring about my marital status. But upon being told a few minutes later of an upcoming city council meeting, Bermudez's mood changed; he slammed his water bottle lid on his desk and uttered a profanity in Spanish.

He mostly shuns local reporters, who have uncovered unseemly details from his campaigns and administration. According to opposition councilors, the mayor ignores his critics and refuses to engage in dialogue. The Tomato King says the same things about his critics. He frequently brands them as "The rich people."

As Bermudez tells it, he returned to Mexico out of a love for his hometown; a desire to give something back to his people, who the Tomato King said, "See hope in me."

Since taking office, he initiated a bus service for students pursuing university studies 50 kilometers away in Zacatecas. He also tripled the number of scholarships given to needy students. And in a well-worn political stunt common to virtually every Mexican municipality, he passed out 700 backpacks to children and roofing materials and cement to home and business owners.

"These [previous] people spending [the municipality's] money, they didn't spend the money. They took it home," Bermudez said. "All this, I give it back."

He also views himself as a sort of pioneer, a migrant returning to unseat the old corrupt guard, which has presided over the demise of Zacatecas and sent hundreds of thousands of residents fleeing the state.

Percentage wise, Zacatecas loses more of its population to migration than virtually any other Mexican state. More Zacatecanos live in the Los Angeles area than the state capital. Although a drought recently ravaged the semi-arid state, local hotel owner Alfredo Saldaña figured most people rode it out by depending on the generosity of relatives living abroad. Mexican migrants sent home more than 15 billion dollars last year, according to the Bank of Mexico. More than 400 million dollars of those remittances flowed into Zacatecas, which has a population of 1.3 million.

The remittances from the United States often fund municipal projects, giving migrants an increasingly influential voice in Zacatecas politics. Through a program dubbed "Tres por Uno (Three for One)," the federal, state and municipal governments match funds sent by migrants through clubs formed in the United States.

"If you see a new church in Mexico, U.S. money makes it," Bermudez explained, adding remittances were "the only way Mexico survives."

Critics though, including Marquez, said Bermudez showed little interest in Jerez prior to 2001, when he first ran for mayor under the Democratic Revolutionary Party (PRD) banner. (He later won in 2004 as a National Action Party [PAN] candidate.) Additionally, she said fewer Tres por Uno projects have come to Jerez since he took over. According to Marquez, other than opening a cantina, Bermudez has never invested a dime in Jerez, one of the first towns where Tres por Uno was implemented.

And in the opinion of some of his critics, it's due to a lack of funds.

"Andres Bermudez is not rich," asserted Heriberto Caldeva Ruedes, a campesino and Institutional Revolutionary Party (PRI) councilor, pointing to the people who came forward during the last election, claiming the Tomato King owed them money, as proof.

Like Bermudez, Caldeva spent more than two decades in the United States before returning. Nowadays he farms beans, corn and chilies.

"The scam he pulled on the Jerezanos and the way he got their votes was by saying he was going to bring a machine for planting tomatoes all over Jerez," Caldeva explained, adding the young people voted for Bermudez expecting, "He was going to get them visas to go to the United States."

According to the Associated Press, Bermudez left debts of more than 800,000 dollars in the United States. Bermudez acknowledged owing money in California, including back taxes, but attributed his financial hardship to spending so much time seeking office in Jerez.

Bermudez insists he lives a simple life in Jerez, driving a relatively new Chevrolet pickup and living in a modest home on the outskirts of town. His three children still reside in California.

Contrary to some recent headlines, Bermudez has no plans to leave Jerez anytime soon. His term expires in September 2007. He used a farming metaphor to emphasize his commitment, saying, "I planted a seed in the ground and I want to see it grow."

From the Guadalajara Colony Reporter.