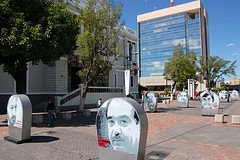 The University of Guadalajara ousted its rector Aug. 29 over vague allegations of mismanagement, sparking calls for campus demonstrations, a string of appeals and accusations of power-brokering at the nation's second-largest public university.

On Aug. 29, Rector Carlos Briseño was ousted by the university's governing council, a body packed with loyalists of Raúl Padilla, a controversial former student leader and rector who is considered by many to be the most influential figure in the university over the past 25 years.

Briseño, too, had once been a friend of Padilla, but after he began cozying up to the local governing National Action Party, or PAN, and the leading opposition Institutional Revolutionary Party, or PRI, both of whom had long been at odds with Padilla, he quickly fell out of favor.

"Carlos Briseño arrived [in the rector's] office by the decree of Raúl Padilla, but the strongman made a mistake," said El Universal columnist Jorge Zepeda, a former editor of the Guadalajara newspaper Siglo 21.

But Briseño wouldn't roll over and play dead, despite decisions by Jalisco Gov. Emilio González and the Public Education Secretariat not to intervene in the case. Instead, he immediately denounced his firing as illegal and began pleading his case to the citizens of the western state.

He convinced a local court to grant an injunction against the firing, but it was overturned Sept. 4 by a federal judge.

Meanwhile, back on campus, 1,500 sympathetic students and teachers in his support on Sept. 5, some of them chanting: "Out with the Padilla crowd!"

Briseño assumed the post of rector in early 2007, and it did not take long before he was losing favor with his former mentor.

In late August, Briseño began suggesting reforms at the Centro Cultural Universitario, which oversees a group of successful businesses and projects including hotels, language schools, a burgeoning film festival and the prestigious International Book Fair - the second-largest event of its kind in the world.

Many of the projects had been founded by Padilla, and he had remained as the head of the center after stepping down from the rectory in 1995 at the end of a six-year term.

When asked in an Aug. 28 radio interview why the center and Padilla's leadership of it were being scrutinized, Briseño responded: "Absolute power corrupts.

"I don't have any proof, but we're investigating . we're going to audit each one of the university's businesses," he said.

For some observers, the firing showed how the university, despite its reputation as an institution on the vanguard of higher education, at the same time remains wedded to an old-style authoritarian leadership.

"At this university, both the past and present are very much alive," said Sergio Aguayo, a professor at the Colegio de México and a Jalisco native.

"There are parts that are excellent, but very large parts are extraordinarily backward in their political culture."

Zepeda, a University of Guadalajara graduate, called Padilla, "a benign strongman," whose use of power has been both "favorable and unfavorable."

Under Padilla's guidance, both as rector and behind-the-scenes playmaker, the school undertook modernization initiatives that included decentralizing power to regional centers beyond Guadalajara, and organizing successful cultural events.

"In many ways, it's been more at the [cultural forefront] of any other university of the country, including UNAM," Zapeda said.

But the U. de G. - as the school is known locally - has also been viewed suspiciously due to a lack of transparency in its finances. And the school's not-so-secret affiliation with the local Democratic Revolution Party, or PRD, which is headed by Padilla, also raised local hackles.

Briseño brought differing political allegiances to the Padilla inner circle. He was openly friendly to the PRI and numerous PRI functionaries, including Gov. Mario Marín of Puebla, Nayarit Gov. Ney González and party president Beatriz Paredes, attended his annual state of the university address in April 2008.

Local newspapers called the annual state of the university address "A coming-out party" for Jalisco's most prominent PRIísta.

Then, when he began forging better relations with the local PAN administration, which had previously denounced the U. de G. for a lack of transparency, he really fell out of favor.

"He had a series of political commitments, with political forces, that were inconvenient for the university . [including] the old national PRI," Zepeda said. "Briseño suddenly represented the possibility of breaking [the U. de G.] open, but for the worst reasons.

"Everyone views it as a jackpot."
Posted by David Agren at 10:01