Calderón visit as much about domestic politics as visa-free travel 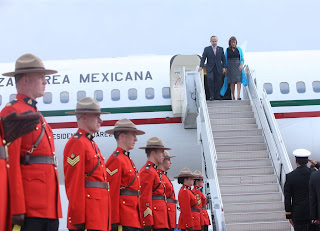 What isn't being said about President Felipe Calderón's globetrotting ...

Calderón visit as much about domestic politics as visa-free travel

MEXICO CITY -- Mexican President Calderon publicly scolded his American hosts during a visit to Washington last week, when used a speech to a joint session of Congress to condemn an anti-illegal immigrant measure recently passed in Arizona and lax gun laws that facilitate the southward flow of weapons into Mexico.

The condemnation drew scorn in the United States, but played well with the domestic audience back home - especially in the political class.

It’s uncertain if Calderon will bring a similar tough approach to Ottawa this week, his first trip to the capital since the federal government imposed visa restrictions last July on Mexicans heading to Canada.

What is certain, however, is that Calderon brings the same pressing domestic and political concerns to Ottawa as he did to Washington -- even though the visit appears timely: The Canada-Mexico relationship has appeared to be less openly friendly over the past year as the new visa regulations for Mexicans have been poorly received and visits to Canada -- a country that had been an increasingly trendy destination for tourist trips and studying abroad -- have subsequently diminished.

But political analysts say scolding Canada for imposing visa restrictions on Mexicans, instead of fixing a refugee system rife with abuse and bogus claims, would play well with the domestic audience and be an easy way for Calderon to score political points at a time his National Action Party (PAN) has been performing poorly on the local level and gubernatorial elections are underway in 12 of the country's 31 states. The outcome of those election could shape the final two and a half years of his presidency as he tries to achieve reforms to labor, finance, the political system and the public security apparatus, but confronts a divided Congress and increasing powerful state governors reluctant to cede territorial control over matters of law-and-order .

“He’s going to complain, not in a diplomatic way, but in terms of propaganda, about the need for Mexicans to request a visa,” said Aldo Muñoz Armenta, political science professor at the Autonomous University of the State of Mexico in Toluca.

“The only forum he has to promote his agenda … is that he leaves the country," Muñoz added, referring to the traditions of president not openly campaigning in gubernatorial and local contests.

At home, Calderon faces a tough domestic agenda that goes beyond the problems of security and battling the cartels -- a battle that has claimed more than 23,000 lives since he took office in December 2006.

The Mexican economy, hit hard by the H1N1 outbreak and problems in the United States, dipped by nearly seven per cent in 2009, while the rates of unemployment and poverty have increased.

The resurgent Institutional Revolutionary Party (PRI) -- which governed for 71 years until being deposed by the PAN in 2000 -- could run the table on July 4, further weakening Calderon's administration. It could also add to the PRI's advantage for the 2012 presidential elections as the party already governs 19 states and its governors operate effective political machines for turning out the vote, rule with little transparency and frequently manage social programs for electoral purposes.

“There are many elections in which the PAN is at a disadvantage. He needs … to strengthen his party,” Muñoz said.

“These foreign trips are unavoidable,” he added. “The problem is they’re used for electoral purposes.”

Muñoz expects Calderon to raise the visa issue prominently in Canada -- much as he raised the migration and gun issue in the U.S. Congress.

Others issues on the Canada-Mexico agenda include trade, the expansion of programs for sending temporary and agricultural workers to Canada and Canadian assistance in combating the ongoing security problems in Mexico. The Mexican media is certain to raise the issue of fugitive union boss Napoleon Gomez, who has been residing in Vancouver to avoid charges pertaining to the misappropriation a $55 million trust fund.

But the travel visa still generates some negative headlines and hurt feelings in Mexico and its clumsy and sudden implementation has not been forgotten.

The pop-culture publication “Chilango” summed up the mood at the time of the visa’s implementation with its cheeky front-page admonishment, “Be patriotic and don’t be go to Canada” -- a twist on a common expression disparaging “chilangos,” as Mexico City residents are known.

Muñoz says the visa issue, like any matter pertaining to migration -- a perpetual issue in many downtrodden parts of the country -- would receive the most attention in Mexico and provide Calderon with the best opportunity for building political capital.

“Migration is a permanent issue in Mexico. It continues being an issue capitalized on a lot … it’s a beneficial issue for politicians.”
Posted by David Agren at 07:56