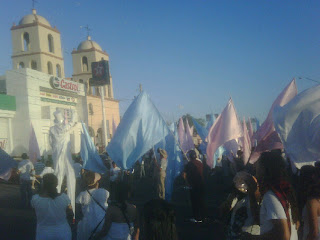 The victims of the daycare fire that claimed 49 young lives one year ago in Hermosillo were remembered over the weekend during a series of memorials and marches that carried an undercurrent of anger and outrage - for both the high death toll and perceptions the officials responsible for operating, regulating and inspecting the burned-out facility might never be brought to justice.

President Felipe Calderón declared June 5 a national day of mourning, but some parents of children killed and left scarred by the fire - who met with the president - want something more: justice.

One parent, Abraham Fraijo, who was among those holding a vigils for their children at the Angel monument in Mexico City, summed up the families' struggles, telling the newspaper La Razón, "If there were justice and the government did what it should do, I would be keeping vigil over my daughter at home, but there is no justice so we have to come and speak out."

The tragedy at the ABC Daycare has been polemic and political from the moment the facility in a working-class neighborhood of Hermosillo caught fire.

It revealed extreme shortcomings in the Mexican Social Security Institute (IMSS) system of daycare centres, which a Supreme Court investigation found were rife with "generalized disorder." It revived outrage over the perceptions of rampant impunity in Mexico as justice has yet to be handed down in the case. It derailed the political career and presidential aspirations of the then-outgoing governor of Sonora, Eduardo Bours, as the the opposition National Action Party won the gubernatorial election one month after the fire - a lone victory for the PAN in what was otherwise a forgettable year at the polls. It could prompt more political repercussions as the current and former presidents of the IMSS - Daniel Karam and Juan Molinar, respectively - could be forced to resign their political posts, pending the final findings of a Supreme Court investigation.

DAMNING REPORT
The initial findings of the investigation headed by Justice Arturo Zaldívar and delivered June 3 offered a damning assessment of the ABC Daycare and the daycare centres run under contract for the IMSS, an institution notorious for problems in its outsourcing in and procurement processes.

"This high tribunal finds the existence of a link between the generalized disorder [in the IMSS daycare system] and the ABC daycare because the irregularities found in the granting of the contract, as in its operation and supervision are analogous to those that are evidenced in the great majority of the daycare centres that operate under this scheme," the initial court investigation said.

The investigation found fire extinguishers were missing from 57 percent of the more than 1,400 IMSS daycare centres operated under contract. Another 47 percent lacked emergency exits.

The ABC Daycare lacked an adequate number of emergency exits and smoke detectors, the investigation said.

COURT CONTROVERSY
The investigation also declared Bours, Karam and Molinar responsible for not protecting the individual guarantees of the children in the ABC Daycare.

Bours, the court investigation said, oversaw a state civil protection agency, which failed to "detect the accumulation of risks that surrounded the ABC Daycare and the time bomb that the adjacent storage room represented." The June 5, 2009 fire broke out in a nearby storage room located in the same building as the daycare and quickly spread.

The court said Molinar - IMSS president from December 2006 until March 2009 - oversaw the "generalized disorder" in the way the daycare centres were operated and licenses granted, "which led to the conditions for the tragedy."

Karam was mentioned for similar IMSS shortcomings and complaints over the medical treatment provided to the victims. He was not mentioned in a preliminary report on the court's investigation released March 1.

Bours has denied responsibility for any wrongdoing - as has Molinar, the current secretary of transportation and communications (SCT) and a close collaborator of Calderón. (Molinar moved from the IMSS to the SCT after former SCT secretary Luis Tellez was caught in a scandal, featuring a recording of him implicating former president Carlos Salinas in improper activities, but not offering any proof to sustain his allegations.)

Molinar defended himself in a June 3 statement, which read, "It's necessary to emphasize that the factors that contributed to the creation of that risk and the tragic consequence were all, without exception, out of human reach and the normative of any IMSS functionary," a reference to the flammable materials being kept in the adjacent store room.

Molinar expressed dismay in his statement that he was never interviewed by the court nor approached for information. He also differed with the court over its assessment of the state of the IMSS daycare centres.

Karam said he would abide by the outcomes of any court investigations, although some analysts suggested he was receiving a raw deal since he only assumed his position three months prior to the daycare fire and spent the early months of his job focusing on the IMSS response to the outbreak of the H1N1 virus.

"Karam is paying for the tendency of the Justice Arturo Salívar to satisfy public opinion," Raymundo Riva Palacio wrote in his June 5 column in La Razón.

COURT CONTROVERSY
The court's involvement has been controversial as the 11 justices have the authority to investigate gross human rights violations, not criminal matters - something the court made clear earlier this spring, when it declined to investigate the 1993 slaying of Cardinal Juan Jesús Posadas Ocampo of Guadalajara. Previous court investigations have been controversial, too - most notably a late 2007 finding the rights of Cancún journalist Lydia Cacho were not violated, despite her being detained and transported to Puebla, where she was jailed for supposedly defaming a businessman with close ties to Puebla Gov. Mario Marín.

The current investigation is courting the same sort of controversy as some analysts have argued the court has no business investigating criminal matters. Regardless of the outcome, the case will not result in criminal charges.

It could prompt the resignations of Molinar, Karam and others affiliated with the IMSS, but that seems to be insufficient for many of the parents.

"No one has gone to jail for the death of the little ones," Lorenzo Ramos Félix, a lawyer for the victims, members of the "Movimiento por la justicia 5 de junio," told El Universal. "That's what inflames the families."
Posted by David Agren at 16:17

Email ThisBlogThis!Share to TwitterShare to FacebookShare to Pinterest
Labels: IMSS