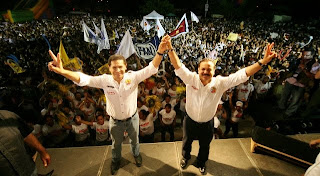 Gregorio "Greg" Sánchez - the gospel-singer-turned-Cancún mayor-turned-PRD-gubernatorial-candidate-turned-accused-drug-cartel-associate - was disqualified Thursday from the July 4 election in the southeastern state of Quintana Roo. The state electoral institute (Ieqroo) decision to disqualify Sánchez followed a previous Federal Electoral Institute (IFE) decision to remove Sánchez's name from the voters' list, a result of him being charged with drug, money laundering and organized crime offences and subsequently being jailed in Nayarit state.

Candidates charged with crimes lose their political rights, which include the right to vote and to run for public office. The Sánchez campaign said it will appeal the decision, while the Ieqroo gave the members of the coalition he headed - the Democratic Revolution Party (PRD), Labour Party (PT) and Convergence party - five days to choose a new candidate.

The PRD had insisted Sánchez would continue campaigning - even from prison - although party president Jesús Ortega conceded prior to the Ieqroo decision being handed down that other unnamed candidates were being considered.

The decision threatens to further politicize an already tense situation in Quintana Roo, where Sánchez's supporters and the PRD have alleged bias and branded the case another "Michoacanazo," a reference to the detentions of state and municipal officials with alleged cartel ties in PRD-dominated Michoacán one year ago, during the early stages of the midterm elections. Many of those officials were subsequently released from prison without being convicted of any crimes.

Sánchez's lawyers revealed June 2 the PGR file on their client alleges he attendented a "historic summit" in Acapulco last year with none other than Joaquín "El Chapo" Guzmán, leader of the Sinaloa Cartel, and the leaders of other cartels.

The incumbent Institutional Revolutionary Party (PRI) in Quintana Roo, President Felipe Calderón and Interior Secretary Fernando Gómez-Mont all have rejected allegations of bias. The Attorney General's Office (PGR), meanwhile, has stated that Sánchez and the PRD leadership knew of an ongoing investigation into the mayor of Benito Juárez - the municipality containing Cancún - since January.

The Sánchez campaign acknowledged its prior understanding of the situation as it released videos - filmed before the candidate's arrest - in which Sánchez proclaims his innocence.

UNPRECEDENTED?
No potential candidate had faced the prospect of being declared ineligible since the 2005 attempt to impeach then-Mexico City mayor Andrés Manuel López Obrador of the PRD, who fomented mass protests in the capital that ultimately forced the federal government to back down from what had largely been viewed - rightly or wrongly - as an underhanded effort to thwart the aspirations of a populist presidential frontrunner.

The judicial actions against Sánchez have been interpreted in a similar way by many in the PRD, although López Obrador himself and some of his followers have showed little support - a reflection of the former presidential candidate's cool relations with the current PRD leadership, which is headed an archenemy, Jesús Ortega, and the New Left faction. The case differs in that López Obrador was accused of failing to respect a judicial injunction pertaining to a piece of property in the Santa Fe district of Mexico City, while Sánchez is accused to being linked to the Beltrán Leyva Cartel and Los Zetas - along with various financial irregularities.
Posted by David Agren at 15:45

Email ThisBlogThis!Share to TwitterShare to FacebookShare to Pinterest
Labels: PRD