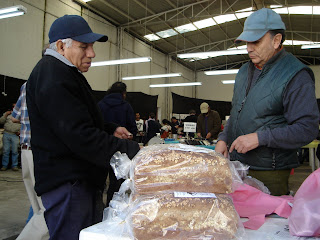 Rogelio Alcántara rose early Sunday morning to bake hundreds of loaves of bread from a scratch recipe calling for whole-wheat flour, oats, flax and sunflower seeds. The bakery owner from Coacalco, State of Mexico, hauled the bread to the capital's Colonia Roma, where the he set up a table at a garage sale organized by Andrés Manuel López Obrador and hosted in a warehouse adjacent to the abode that hosts the headquarters of the election runner up's "legitimate government."

The loaves sold briskly for 22 pesos each – not surprising since some López Obrador followers publicly loath the ubiquitous offerings from baked good giant Bimbo and mock the company on signage at "legitimate government" events. But Alcántara only pocketed the costs of baking the dense loaves and planned on donating the profits to the "legitimate government."

Alcántara was only one of the dozens of participants at López Obrador's garage sale, an event attendees said was an opportunity support the "legitimate government" while poring over an eclectic range of merchandise that ranged from an old typewriter to used clothing to a 1987 history of the National Polytechnic Institute's student movements – still in its original cellophane wrapping. But their generosity also addressed a real and potentially troublesome concern for López Obrador: Financing.

The garage sale was held as López Obrador's financing comes under scrutiny and some of his sources of monetary support have already disappeared. Other sources appear to be in jeopardy.

Already some lawmakers in the Democratic Revolution Party, or PRD, publicly said they would withhold voluntary monthly donations of up to 20,000 pesos that underwrite the former Mexico City mayor's shadow government and opposition movements in "defense" of the state-run petroleum industry and the deteriorating family economy.

It was also revealed in November that he had traveled to rallies free of charge via pay highways by using a loaned card that allows lawmakers to avoid paying tolls. And earlier in the year, allegations were made that money flowed from the various Mexico City boroughs into the leadership campaign of Alejandro Encinas, who López Obrador was backing for PRD president.

López Obrador's long-term financial prospects could also be hurt by his candidate's loss in the PRD leadership contest as rival factions will now control the party's finances.

Questions from other political parties are now starting to be asked. On Sunday, the Social Democratic Party, PSD, which had an apparent election deal with the PRD scuttled last weekend by López Obrador loyalists, demanded an investigation in to López Obrador's finances. PSD president Jorge Díaz Cuervo said Sunday that his party would demand a Federal Electoral Institute, or IFE investigation since López Obrador could use his various movements to promote loyal political candidates in the 2009 midterm elections. The PSD estimates that the "legitimate government" operates on a monthly budget of between 5 and 6 million pesos.

Despite the controversy, some income sources have been unwavering. Many lawmakers in the FAP coalition of left-wing parties plan on maintaining their monthly donations and planned on turning over a portion of their Christmas bonuses to "López Obrador."

The "legitimate government" claims that it has signed up 2.2 million members since being formed in 2006. Some of its members, like Chalco, State of Mexico resident Ignacia Martínez López, are also unwavering.

"We came to support [López Obrador," she said while toting a bag brimming with used clothes – and loaves of bread.
Posted by David Agren at 12:50 No comments:

Mexico's Calderón Faces More Obstacles Ahead (By Patrick Corcoran) and What's Next for Andrés Manuel López Obrador? (By David Agren.)
Posted by David Agren at 14:03 1 comment: