The Lopez Obrador saga keeps generating headlines and could potentially lead to some curious - and troublesome - outcomes.

The PRD aspirant told Le Monde that a proposed "National Democratic Convention" scheduled for Sept. 16 in Mexico City's Zocalo could declare him the "legitimate president." He argued that Article 39 of the constitution - a document many Mexicans can quote surprisingly well - permits it. Lopez Obrador, of course, fell short by some 244,000 on July 2, but little of that seems to matter.

Lopez Obrador often referrs to the people. During the campaign, he and his supporters would always rebuke unfavorable polls, which they attributed to various enemies, including Los Pinos, by saying the PRD had the support of the people. In other words, to paraphrase Lopez Obrador biographer George Grayson, Lopez Obrador views laws and election outscomes as the will of the people as he interprets it.

Various critics referred to Lopez Obrador as a cacique (strongman) in response to the interview. The PAN responded by saying Lopez Obrador's actions prove their campaign assertion that he is, in fact, "A danger for Mexico."

As for the National Democratic Convention, if held as proposed, it would displace the military's annual parade on Sept. 16 (Independence Day) and interupt the grito, when the president shouts, "Viva Mexico," in central Mexico City.

Fox, not wanting to upset anyone too much - as per usual - said he would give the grito in the Zocalo, but invited the camped-out protesters to participate. They declined. The mayor of Dolores Hidalgo, Guanuato, where Miguel Hidalgo gave the first grito in 1810, triggering a revolt against Spanish rule, has asked Fox to come to the cradle of Mexican independence instead.

The protesters show no signs of leaving anytime soon, putting the Mexico City government on the spot - needing to remove tents so normal festivities can take place. This won't happen as the PRD government in the Federal District openly supports Lopez Obrador's struggle, which wouldn't be accomplishing much were it not for their support.
Posted by David Agren at 16:21 No comments:

Protests show no signs of ending

I penned a large article on the plantones (blockades, for lack of a better word) in Mexico City for World Politics Watch. Due to the story's length, I'll simply just provide the link. Be sure to check out the rest of the site too; it offers a lot of worthwhile stuff from overlooked corners of the globe.
Posted by David Agren at 12:38 No comments:

Is the Chiapas election another July 2?

The alliance Por el Bien de Todos (For the good of all, which includes the PRD, PT and Convergence) narrowly captured the Chiapas gubernatorial race last Sunday by a miniscule 2,405 votes, according to the preliminary vote count. (Around 94 percent of the ballots had been counted.) Andres Manuel Lopez Obrador, who left his tent in the Zocalo to campaign in the impoverished, but picturesque southern state, proudly crowed: "We stopped the right in Chiapas," and interpreted the result as a validation of his movement and its tactics.

Like many elections in Southern Mexico, stories of chicanery filtered out of Chiapas. Hurricane Stan victims - some of whome are still living in misery - supposedly were denied relief supplies unless they flashed a voter identification and promised to vote for one of the parties. Gifting despensas no doubt also occurred.

Due to alleged irregularities (no surprise there) the PRI denounced the election results. To thwart the PRD-led coalition, the PRI, PAN, New Alliance and Green Party forged a last-minute coalition, backing the PRI candidate. (Some two percent of the voters, however, still voted for PAN ...) PAN said it would also dispute the election, but wouldn't foment street protests.

While the results obviously look good for Andres Manuel Lopez Obrador, the outcome could actually hurt his cause as PRD candidate Juan Sabines Guerrero shared little of Lopez Obrador's passion for street protests. Grupo Reforma columnist Sergio Sarmiento pointed out, "The election results in Chiapas could turn into a problem for an important part of the PRD."

Sabines, who was a part of the PRI until recently, said he wouldn't go along with Lopez Obrador's call for nationwide protests. He recently stated, "Chiapas deserves a climate of unity and reconciliation."

He also promised to recognize a Felipe Calderon victory, should the election tribunal declare the PAN candidate the winner.

"The problem with Sabines' attitude is that it could weaken Lopez Obrador's movement," Sarmiento wrote on Wednesday.

"The fact is that many people honestly believe there was fraud, but they consider it a strategic error to block the Zocalo and Paseo de la Reforma.

"Many PRD supporters clearly see the deterioration of their party's image due to Lopez Obrador's blockades."
Posted by David Agren at 10:14 No comments:

The Communications and Transportation Secretariat (SCT) thankfully derailed plans for building a bullet-train line between Mexico City and Guadalajara. The line, which would have cost around eight million pesos per kilometer, would have run mostly likely passed through Queretaro, Celaya, Irapuato and Leon and sped between the capital and Guadalajara in just two hours and 35 minutes. (Andres Manuel Lopez Obrador promised to build a bullet train from Mexico City and the border during his campaign.)

Jalisco officials, most notably Governor Francisco Ramirez Acuna, blasted the project's demise, saying it would impact economic development in the state. In fact, this Soviet-scale scheme would probably achieve no such thing. Bullet trains seldom - if ever - make money, especially when new and unexpected competition arrives. A spate of new discount airlines recent took flight in Mexico, slashing the cost of travel and obviously speeding it up. (A flight between Guadalajara and Toluca often costs only marginally more than luxury bus ticket.) The bus network in Mexico is also fairly efficient. Train fares would probably not have competed favorably.
Posted by David Agren at 00:27 No comments:

In San Luis Soyotlan, Jalisco, where this old-timer named "Don Ramon" sells brooms, sombreros and mats.
Posted by David Agren at 16:38 No comments: 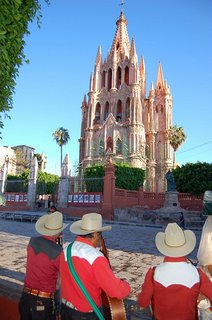 I recently spent eight days in San Miguel de Allende compliments of Simply San Miguel, a business run by two good friends, Linda Lowery Keep and Camie Sands, who invited a group of journalists to get to know the city. Every thing was first rate, especially the Casa de Aves, a newly-opened resort in a bucolic setting outside of San Miguel. The mask collection in Casa de la Cuesta is second to none - except maybe the Pedro Coronel Museum in Zacatecas. And Berlin, a restaurant/bar run by German expatriates, has one of the best atmospheres - sort of a funky/chill vibe - I've encountered.

San Miguel de Allende obviously attracts many Americans - especially Texans around this time of year - but underneath the expatriate veneer the authentic Mexico with its tianguis, festivals and fireworks is easily indulged. Still, vendors in San Miguel de Allende hawk asparagus, which speaks volumes about the place and the type of people passing through.

For potential residents, Simply San Miguel puts together lifestyle tours that go beyond seeing the central jardin and stuff listed in Fodor's. Like promised, it goes behind closed doors and dishes up an authentic taste of what living in Mexico is like. And for those ready to move south, they know all the people who can make it happen seamlessly.
Posted by David Agren at 12:51 No comments:

Alleged fraud and Felipe Calderon: It happened before

During the primary, which took place in three stages with ten or eleven states voting at a time, allegations of irregularities led both Creel and Cardenas to allege fraud. In Yucatan, a PAN stronghold, Cardenas defeated Creel 16,903 to 3,940. Cardenas denounced the results in Yucatan, Puebla, Chiapas and Verecruz. (Cardenas, who also served as environment secretary, only captured Jalisco, his home state.) Calderon won the early rounds and rode his front-runner status to the nomination.

Solid proof was lacking then - as it is now - but it is rather ironic Calderon keeps winning this way.
Posted by David Agren at 13:03 No comments:

Pictures from the camp out

I wandered up and down the rather tranquil Paseo de la Reforma in Mexico City last Thursday, passing through the camp sites occupied by Andres Manuel Lopez Obrador's supporters. While not exactly luxurious, most featured televisions, radios, concerts, discussions, arts and crafts areas and plenty of acerbic and witty descriptions of the PAN, IFE, Felipe Calderon, President Vicente Fox, teachers' union president Elba Esther Gordillo and everyone's favorite whipping boy Carlos Salinas. Some of the propaganda descended into extremely poor taste, though - the 29-year-old from Durango dressed in a Klan costume and the swastikas painted over Calderon's photos and PAN logos, for example. Activists taking up other causes - like Israel's military actions in Lebanon - also infiltrated the camps.

Here are some photos from the rather sedate sites.

TRIFE: Count some of the votes

Mexico's election tribunal ordered a partial recount yesterday, but that failed to pacify PRD candidate Andres Manuel Lopez Obrador and his supporters, who promised to keep up their "civil resistance" in Mexico City's streets until all of the votes are counted again.

Lopez Obrador's all-or-nothing approach found little support from the other four electoral factions. The PAN, PRI and Alternativa backed the election tribunal's decision. Support for a recount runs at slightly less than 50 percent of respondents according to an Ipsos Bimsa survey. Grupo Reforma found 60 percent of its respondents against a recount. (It conducted a telephone survey, which could have undercounted poorer regions, where telecommunications service isn't widespread and the PRD is popular. Perhaps Lopez Obrador gripes about Grupa Reforma for a reason.)

The recent protests, which closed the capital's Paseo de la Reforma and Zocalo (town square), drew criticism from both intellectuals and ordinary chilangos, who in some newspaper reports, expressed buyer's remorse, ruing the fact they voted PRD. The disruption to everyday life has possibly alienated more supporters than it's won.

In an enlightening interview with Excelsior, former PRD Mexico City mayor Rosario Robles condemned the street protests. In blunt language, she castigated the PRD government in the Federal District for cozying up to the Lopez Obrador campaign. She also said the PRD was behaving like the old PRI. Previously, the PRI was an extension of the government. Now, Robles said the PRD government in Mexico City is putting itself at the service of the PRD campaign.
Posted by David Agren at 16:32 1 comment: