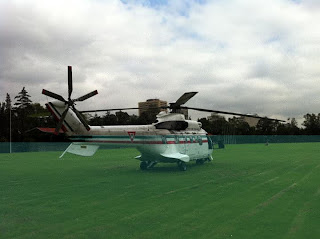 Mexican Interior Minister Francisco Blake Mora died Friday in a helicopter crash, the second time in three years the most senior member of President Felipe Calderón’s cabinet has perished in an aviation disaster.

Federal government spokeswoman Alejandra Sota confirmed the death shortly after 12:30 p.m. local time. The crash, just to the southeast of Mexico City, claimed the lives of Blake, 45, along with seven passengers and crew. There were no survivors. Calderón was reported en route to the crash site. It's uncertain if he will depart later on Friday for APEC meetings as originally planned.

Both men were key figures in the country's national security cabinet and coordinating security matters during a time that organized crime violence increasingly spread into previously placid pockets of Mexico.

Aviation crashes involving senior government officials have been distressingly frequent over the past decade. Colima governor Gustavo Vázquez died in a 2005 plane crash. More recently, a helicopter belonging to the Mexico state government crashed last month in the Coyoacán borough of Mexico City, killing two state officials. Billionaire businessman Moisés Saba died in a helicopter crash during bad weather in the western part of the Federal District in January 2010.

It's still uncertain who might replace Blake as interior minister, the most senior cabinet position and one responsible for internal security and overseeing agencies ranging from the National Immigration Institute to civil protection to Cisen, the country's intelligence service. The interior minister also acts as a liaison between the federal government and Congress and the 31 state governments.

Blake Mora was an unlikely choice for interior minister, having previously spent most of his political career in the Baja California state government and serving with Calderón in the federal lower house of Congress.

He sas the fourth interior minister of the Calderón administration and he replaced a political heavyweight: Fernando Gómez-Mont, one of the country's top lawyers and a close associate of none other than Diego Fernández de Cevallos – better known as "Jefe Diego." Gómez-Mont left cabinet after disagreeing with Calderón over the National Action Party's decision to pursue electoral alliances with the Mexican left in order to topple governments in six of the country's most retrograde Institutional Revolutionary Party (PRI) backwaters, including Oaxaca and Puebla.

A distraught-looking Calderón eulogized Blake during comments to the nation shortly after 2:30 p.m., describing the fathar of two as dedicated to his country and someone who emerged from working class roots in Tijuana to earn a law degree and ascend to top positions in the Baja California and federal governments.

No details on the cause of the crash were given.
Posted by David Agren at 12:43 No comments:

A poll published Nov. 3 in the Reforma newspaper gives PAN candidate Luisa María Calderón a six-point advantage in the Michoacán gubernatorial contest. Left unanswered is how the Nov. 2 assassination of La Piedad mayor Ricardo Guzmán Romero as he campaigned for Calderón will impact the Nov. 13 election in Michoacán, where the quasi religious drug cartel La Familia Michoacana and a splinter group, Knights Templar, are disputing the state.

It's probable, as happened in Tamaulipas after the assassination of PRI gubernatorial frontrunner Rodolfo Torre Cantú, voter turnout will plunge – something which favours the PRI (witness the low participation in the State of Mexico) as the party gets its mostly poor "voto duro" to the polls with inducements and coercive tactics and the middle classes stay home.

A Calderón victory would bolster the president as he attempts to establish some sort of lasting political legacy for the PAN, which has struggled in local elections during his administration and appears set to be voted from power on the federal level in the July 1, 2012 national elections.

The results could prove disastrous for the PRD. The party has been beset by infighting and its plans to name the 2012 presidential candidate from a poll is expected to generate discontent among the losing side – be it 2006 candidate Andrés Manuel López Obrador or Mexico City Mayor Marcelo Ebrard. The party already has lost the stronghold states of Baja California Sur and Zacatecas. Michoacán, where the party also has been rife with infighting, appears to be next.

The PRI is running competitive in Michoacán, but its campaign has yet to capture any serious momentum – spare the moments when the party's presidential frontrunner Enrique Peña Nieto showed up for a day of campaigning.

One observer, parish priest Jesús Alfredo Gallegos Lara – better known as "Padre Pistolas" – cast some doubt on the Reforma poll, saying the survey was done by telephone in a state where "many of the ranchos don't have phones." The PRD, he told me, draws most of its support from the ranchos.
Posted by David Agren at 13:28 No comments:

Email ThisBlogThis!Share to TwitterShare to FacebookShare to Pinterest
Labels: Michoacán

A sign in the Cherán, Michoacán, town plaza strikes a rebellious note. The town rebelled against illegal loggers clear-cutting the local hills with the help of armed criminal groups earlier this year – and ran off the local mayor, too. Michoacán electoral officials want there to be a vote in Cherán, but locals say they won't allow political parties to participate.

Ricardo Guzmán Romero was fatally shot while campaigning for the PAN candidate in the pork-processing town of La Piedad, PAN officials said via Twitter. The circumstances of the assassination remain uncertain, but PAN youth president Jhonathan García, who was witness to the shooting, said via Twitter that the mayor was shot in the abdomen. Press reports say Guzmán was passing out pamphlets when attacked.

The assassination marked the latest difficulty for Michoacán's electoral process, which will renew the governor's office, local congress and 113 municipal governments. The state electoral institute reports the withdrawal of 51 candidates, according to the newspaper El Universal. The PAN-New Alliance coalition, meanwhile, was unable to find candidates in at least 10 municipalities.

Residents of Cherán, where locals ran off illegal loggers, organized crime, the police and the mayor, refuse to allow political parties to run candidates, even though the electoral institute insists on there being a vote.

Violence, of course, predates the election in Michoacán, where La Familia Michoacana and a splinter group, the quasi-religious Knights Templar, are disputing the state. Michoacán native Felipe Calderón sent troops to Michoacán shortly after taking office – the first such deployment of his administration.
Posted by David Agren at 20:52 No comments: