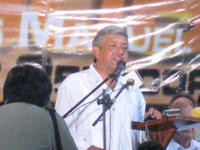 "They haven't fulfilled their promises," Cortes said, while waiting along the side of the road in Ciudad Guzman for the man now carrying his hopes for a better Mexico to arrive: Andres Manuel Lopez Obrador.

The presidential frontrunner brought his pre-campaign tour to southern Jalisco on Thursday, attracting an estimated crowd of 4,000 supporters - and a few hecklers - for a rally in the heart of a PAN stronghold dominated in recent years by Cardenas.

In the last federal election, Lopez Obrador's left-wing Democratic Revolutionary Party (PRD) won less than ten percent of the vote in Ciudad Guzman, a figure supporters predict could jump to 30 percent in 2006.

Cardenas still garners immense support in his native Ciudad Guzman. His face graces countless campaign billboards and bumper stickers. Like Fox, the man who ended one-party rule in Mexico five years ago, Cardenas can boast of a similar accomplishment: he vanquished the Institutional Revolutionary Party (PRI) from the Jalisco governor's office in 1995 after a decades-long and often inglorious reign.

"He's still popular," said Felipe Lopez, a former town resident, who was back for a visit from the United States.

"He did a lot, but some of his promises weren't kept."

Lopez Obrador, as expected, made all sorts of promises during his appearance before a standing-room-only crowd in the stuffy municipal auditorium. In a 30-minute speech that grew in its passion as time elapsed, the former Mexico City mayor, dressed in charcoal pants and a white guayabera shirt, promised many of the same things as his competitors: more seats in public schools, less poverty and less corruption. The latter comments drew jeers of, "Burro!" (donkey) from hecklers.

"It's like Coca-Cola and Pepsi Cola, it's the same thing."

His message resonated with many in the audience, some of whom previously backed Fox and Cardenas.

She later referred to the president as a, "Mandilon," (Mexican slang for a man whose wife wears the pants in the family).

Lopez Obrador left Ciudad Guzman like a rock star, with supporters mobbing his white, Chevrolet SUV. The PRD presidential hopeful moved on to Guadalajara, another PAN stronghold, for a rally later that evening.

From the Guadalajara Colony Reporter.
Posted by David Agren at 21:31