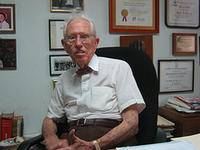 BY DAVID AGREN/Special to The Herald Mexico
El Universal
October 21, 2005

Several years ago, Adolf Horn, the former U.S. consul general in Guadalajara in the early 1960s, obtained a Cuban passport, allowing him to travel to his birthplace as a citizen of the island nation, which is presently off limits to U.S. citizens.
Horn originally applied to the U.S. Treasury Department, which approves U.S. citizens' dealings with Cuba, for permission to travel, wanting to check on the remains of his father and two sisters. Fed up with waiting, he phoned the Cuban embassy, which promptly issued him a passport.

"As far as Cuba's concerned, I'm a citizen," he explained.

Besides having the unusual distinction of being a former U.S. diplomat with a Cuban passport, Horn is also probably one of the few to launch a successful food service company in a foreign country upon retirement. The 94-year-old founded Helado's Bing, a chain of ice cream parlors, after finishing his term as consul general in Guadalajara. He also started the American Chamber of Commerce branch in Guadalajara in 1965, running it until 2002.

"There were very few Americans here who could take the position," he said, explaining why he stayed so long.

Along the way, he's become an icon in the local community, garnering respect from Jalisco's business and political elite. He counts prominent politicians from all sides as friends, including President Vicente Fox. Countless entrepreneurs and political aspirants most recently, Institutional Revolutionary Party (PRI) gubernatorial aspirant Raymundo Gómez Flores seek his advice. Former president Ernesto Zedillo awarded Horn the Order of the Aztec Eagle in 2000 the highest honor Mexico can bestow on a foreigner. Even a street in a Guadalajara suburb was named after him.

Although long involved in civic activities, Horn became famous for the ice cream shops that bear his late wife's nickname.

He scooped his first ice cream cone on Friday, Sept. 10, 1965, at a location near Guadalajara's Los Arcos. Helados Bing originally offered 17 flavors of ice cream made on site, selling it in a setting similar to U.S. chain Baskin Robbins.

"At the time, there wasn't anything [like this]. All they sold was ice cream made in a bucket," he explained.

Business instantly took off perhaps, Horn suggested, out of curiosity.

"All these Mexicans wanted to see this crazy thing the Horns were doing," he said laughingly, adding that by Sunday afternoon, the store had sold out of ice cream.

Helados Bing had opened 14 stores by the early 1980s, when Horn decided to step back, wanting to spend more time with his wife, Lena, who helped him run the business. Coca-Cola initially showed an interest in purchasing his chain, but the 1982 bank nationalization scared the soft-drink giant off. The company's Mexican president José Luis González who initiated the Amigos de Fox fundraising program later bought Helados Bing in 1983, but kept Horn involved.

The chain continued to flourish, implementing a successful franchise system, until González sold it along with the Holanda brand to Unilever in 1997.

Helados Bing has reportedly stumbled in recent years. Its presence in Mexico City has shrunk and, according to a recent Milenio article, some franchisees in the capital have expressed displeasure with the chain's direction.

He offered some observations, however, on Helados Bing's reported problems. He said Unilever, upon buying the chain, dismissed a lot of talented people who knew how to operate an ice cream business and franchise system in Mexico. Many of the former employees went to work for Helados Dolphy.

"They changed the ice cream," Horn added. "Our ice cream was made from cream."

Although removed from the day-to-day operations of Helados Dophy, Horn still regularly goes to his office in the company's headquarters, wearing his trademark short-sleeve shirt and thin bow tie.

"I'm just here as a father confessor," he said modestly of his role.

Still, he shows few signs of slowing down, saying, "It would be great to live another 20 years to see how Mexico developed."

From the Miami Herald, Mexico Edition.
Posted by David Agren at 21:55

Never knew anything about the history of ice-cream. A very interesting post, thank you. and I am a great ice-cream lover. I even think of why not make credit cards to give you discounts on ice-creams?

Because of the link to your site.
We hope to link this site please!

I remember when My husband & I lived in Guadalajara Mex. from 1968-19870.
We just loved to go to the Helados Bing for Rom & raisin Ice Cream and the Cherry ice Cream. The water runs from my lips .. just thinking back on my time in Guadalajara. Here in Denmark we have a new sort of Ice Cream called Peter's Ice and, I hope Mr. Peter will manufact the two sorts from back in 1969. I mailed him today about the issue!
www.petersis.dk
Sincerely