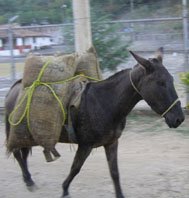 Freddy Martinez Torres and four family members dumped 50-kilogram sacks of freshly-harvested coffee cherries on a buyer's scale in Cafe Cumbre Huicicila, Nayarit, optimistic their crop would fetch a good price. The buyer fiddled with the old scale, weighing the sacks of cherries, before offering 3.50 pesos per kilogram. Although not entirely satisfied with the rate, Martinez accepted it, taking payment on the spot.

"It's not as much as we wanted but it's okay," he said, looking weary from spending a 12-hour day on his 1.5-hectare farm.

"(The buyer) could probably give us more."

The rate compares favorably, though, to the miniscule prices paid earlier this decade, when a crisis ravaged the coffee industry, forcing many farmers off their land. Martinez received as little as one peso per kilogram during those lean years, making this season's rates, which he called "profitable," look pretty good.

Nayarit coffee farmers recently began harvesting their crop in the hills south of Tepic, commencing earlier than last season. Along with enduring record-low prices a few years back, a hurricane flattened many farms in 2003. But unlike other Mexican coffee producing regions, which were hit hard by hurricane Stan, this year's weather proved favorable in Nayarit.

"The region over all looks better," said Charlie Lambert, international sales director for Cafe Cumbre, a large certified-organic producer, which operates near where Martinez farms.

Nayarit lacks the notoriety of Chiapas, Oaxaca and Veracruz, Mexico's famed coffee regions. The state, however, is notable for being one of the most northerly coffee-growing zones in the world. It accounts for approximately five percent of the national coffee output.

Coffee from Nayarit differs from other Mexican regions; Lambert described it as somewhat sweet and lacking bitterness.

"We have several customers ... that buy it principally to blend with their espresso blends," he explained.

Martinez, his father and three brothers farm 17 hectares, which is divided among them. The family sells 20 tons of raw coffee cherries in an average year. About 15 Huichol Indians help with the picking. Family members maintain the farm through the off-season and grow corn and vegetables for their own consumption.

During the coffee crisis, many of the workers went looking for more profitable employment in Nayarit's tobacco and tomato fields. Some farmers also departed, although the Martinez family managed to scrape by.

"The thing about the Martinez family ... their farm is small enough that within the family they can provide virtually all of the labor [except for the harvesting]," Lambert explained, saying that with the current prices being paid, the family should do well.

Also helping, many of the buyers - previously dubbed "coyotes" - have become more scrupulous in recent years. Farmers, equipped with better methods of communication, now know the prevailing market conditions. Five buyers used to operate in Cafe Cumbre Huicicila, sometimes ripping off the small producers, who had little choice but to unload their highly-perishable harvests. Nowadays, only three make the journey up the winding 18-kilometer dirt road from Compostela, Nayarit.

Although 3.5 pesos per kilogram for raw coffee cherries sounds low, it takes 5.4 kilograms of cherries to make one kilogram of green coffee (which is ready for roasting).

According to Lambert, the small producers lack expensive processing equipment, which would add value to their coffee. The recently picked coffee cherries, which have a deep wine-colored hue, must be fermented within 24 hours of being picked.

Cafe Cumbre commands a premium price for its coffee due to the finca's organic certification. It also processes all of its raw coffee, operating a roasting plant in Zapopan. Farmers like Martinez never use chemicals on their land, but without organic certification, he fails to receive a higher price.

Still, unlike previous years, he has a crop and someone offering a reasonable price for it. It's a better situation than in southern Mexico, where hurricane Stan wiped out much of this year's coffee production.

From the Guadalajara Colony Reporter
Posted by David Agren at 13:42