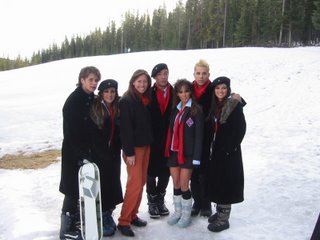 The show ceased production and exited the Televisa airwaves earlier this spring, but Rebelde, the popular and over-the-top teen telenovela lives on in other markets and the show's spinoff band, RBD, which is presently recording an English-language album, keeps churning out one sappy track after another. (Actually, the group made headlines this weekend when one of the male members, Christian, insisted he wasn't gay and a female member, Anahi, said she wasn't anorexic.)

I mention all this because traffic to a posting about Rebelde on my blog exploded recently and most of the hits are coming from South America - most notably Brazil and Peru - along with Romania. Many visitors have left comments in Portugese.

My only brush with Rebelde, other than hearing RBD songs on the radio, came from writing an article for a Calgary alt. weekly - and posting it to my blog - about how the Canadian Tourism Commission and Travel Alberta teamed up to bring the show to the Canadian Rockies for a week of episodes last year. Based on the show's demographics - lot of fresa kids watched it - and the positive feelings towards Canada held by many young Mexicans, the deal apparently made sense.

Here's what I wrote ... it's amusing, which is about the best way to describe Rebelde - the uniforms, characters, social dynamics, curious storylines, etc. - and RBD.
Posted by David Agren at 00:00