Guerrero inches toward the brink 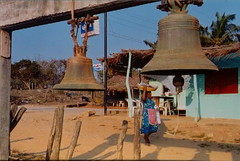 With political and social conditions ripe for upheaval, a student movement could push the state over the edge

Once again, trouble is brewing in Guerrero.

Since November, striking students from a teachers' college in the state of Guerrero have raided the state legislature, barricaded the doors to the governor's residence and fought with state and federal police officers in an effort to extract more funding for rural education and reverse plans for closing down their college.

After unsuccessfully pressing their case to the state governor last week, the students, known as "normalistas," blockaded the Mexico City-Acapulco highway, one of the nation's busiest roads, and occupied radio stations in the state capital Chilpancingo.

The normalistas' protests have made national headlines, especially after they took over a highway tollbooth in order to raise money for their struggle.

Although observers say the protests are not without precedent, the strife comes at a time when political conditions are. One-party rule reigned in the state until the Institutional Revolutionary Party, or PRI, was unseated in 2005. And as a counterpoint to the official political powers-that-be, Caciques, or local strongmen, have long laid down the law.

Democratic Revolution Party, or PRD, candidate Zeferino Torreblanca finally ousted the PRI in 2005 after campaigning on an agenda casting aside decades of repression and dirty tricks. But his failure to meet expectations of change and achieving social calm has left many voters disenchanted, said Mario Patrón, a lawyer with Centro Derechos Humanos de la Montaña Tlachinollan, a human rights group based in Tlapa de Comonfort, Guerrero.

Patrón explained that the 2005 political transition is now viewed as simply one of "alternating power," rather than change. "There have been the same practices, same methods, basically the same vices."

The current tensions have provided just the right conditions for upheaval, according to analysts.

"Conflicts between the state and the normalistas have always occurred. It's not anything new," said Aldo Muñoz, political science professor at Universidad Iberoamericana. "The difference is [that before], there had been a period of stability and calm."

That relative calm may about to end in the state, which ranks among Mexico's poorest and most underdeveloped. The state's illiteracy rate is more than than 40 percent in many rural areas and the human development index scores of its most marginalized municipalities are on par with Sub-Saharan Africa, according to the United Nations.

Guerrero's rugged hills have also spawned social uprisings and guerrilla movements since the time of the Revolution and been the scene of massacres and intense military activity as soldiers hunt down rebels and marijuana growers.

"Guerrero is a state that has been marginalized for decades," Muñoz said. "Because of this marginalization there have been guerrilla groups, groups that are extremely radical in their political postures."

Discontent has been simmering throughout 2007. The EPR, a guerrilla group originating in the state, bombed Pemex pipelines on two occasions over the summer. Campesinos near the coastal city of Acapulco are currently taking legal action against a massive hydroelectric project that threatens to submerge their humble plots of land. They suffered a major setback last month, and the EPR announced it would take up their cause. Narcotics-connected gang violence and recent crime-related beheadings in Acapulco have led to an increasingly tense climate in the state.

The Escuela Normal Rural Raúl Isidro Burgos de Ayotzinapa opened its doors in 1926 with the aim of training teachers to work in the state's rural schools. The school, located in the community of Ayotzinapa, 14 kilometers from state capital of Chilpancingo, enrolls students from small towns and farms. The pupils live at the college during their four years of studying and receive scholarships to attend.

"We're children of campesinos. We're children of the villages where poverty exists," said Alejandro González, a normalista from El Portero Oriental, a town of 544 people, where 46 percent of the population lacks an elementary school education, 18 percent of its residents are illiterate and 31 percent of homes have dirt floors, according to the government.

"All of us studying here understand that our communities need public education," he added.

The striking normalistas left their classrooms in early November, demanding that the state government not close their college (it cited budget concerns as the reason for wanting closure), guarantee teaching positions each year for graduating students and scrap plans for ending a degree program that trains elementary school teachers. They also wanted the education system in Guerrero improved.

González said the state lacks 1,000 teachers in rural areas. Schools in some remote towns have been closed for up to five years, he added.

"The normal has historically graduated teachers known for their social combativeness," said Patrón."

"It's also known for imparting a social and left-wing ideology withits students."

Lucio Cabañas, perhaps the school's best-known graduate, founded the Partido de los Pobres, or the Party of the Poor, in the late 1960s. The armed group kidnapped then PRI Sen. Rubén Figueroa Figueroa, holding him three months in 1974. Figueroa, who later became state governor, was rescued during a police raid. Cabañas was assassinated before the end of the year.

WHEN EDUCATION AND POLITICS COLLIDE

According to Rosas Acevedo, Guerrero's teachers – despite being poorly paid – are often held in high esteem in the communities where they work.

"Teachers, priests and doctors are very important people in these communities," he explained.

"The teachers have a lot influence."

Their influence extends to the political arena, where teachers are especially active. The Guerrero section of the national teachers' union, or SNTE, has a reputation for radicalism and has had frequent feuds with the national leadership.

"The [current] conflict could [have] many repercussions because the teachers and normalistas in Guerrero manage the political parties on the regional level," Muñoz said.

Patrón, whose organization operates in several of the state's poorest regions, expressed pessimism about the ongoing conflicts in the state being resolved peacefully, given the attitude of the state government.

"The present administration … is closing practically all the places for dialogue with social movements and organizations," Patrón said.

"It's generating a tremendous social polarization and social movements are becoming more radical."
Posted by David Agren at 21:44