The politics of energy reform: assessing the winners and losers 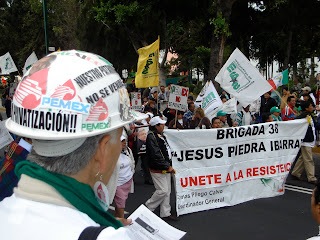 All sides in the energy reform debate lauded themselves for accomplishing what had been politically unthinkable a decade ago – and promptly took credit for the approval of a seven-point package that overhauls the state-run oil concern Pemex and allows for increased private sector participation in the petroleum sector.

President Felipe Calderón called the approval of an energy reform package the most import event in the country’s petroleum sector since March 18, 1938, the day foreign oil companies were evicted from the country by then-President Lázaro Cárdenas. Senior officials in the Institutional Revolutionary Party, or PRI, and Democratic Revolution Party, or PRD, made similar pronouncements, but also highlighted their roles in hammering out an agreement that took more than six months to achieve and involved a 16-day takeover of Congress by left-wing protesters, more than two months of hearings over the summer, a partisan referendum and street protests.

Even ardent energy reform foe Andrés Manuel López Obrador claimed some responsibility for his role in forcing lawmakers to water down the original proposal as he told supporters of this petroleum defense movement that their threats, legislative shutdown and street protests resulted in plans being included for a new refinery - to be built with public money - and changes to some of the company’s accounting rules.

But the self-described “legitimate president” rebuked the final reforms due to the lack of a clause forbidding the exclusive management of specific geographic areas by foreign companies.

PRI THE BIG WINNER?
López Obrador aside, analysts say each of the three big parties won something through energy reform, but perhaps none as much as the PRI.

“The big winner in this is the PRI because its legislative agenda and political agenda is embodied in the final documents,” said Aldo Muñoz, political science professor at the Universidad Iberoamericana.

The PRI, which held the chair of the Senate Energy Commission, unveiled a middle-ground proposal that gained wide acceptance. It proposed scrapping plans for private investment in refineries, storage and pipeline maintenance and discarded the idea of setting up smaller Pemex subsidiaries.

PRI legislators also stayed united throughout the energy reform process, having pacified its more nationalistic factions in the Chamber of Deputies, and protected one of its biggest patrons, the powerful oil workers' union.

“[The union] is a PRI partner and with the PRI winning, the union also wins,” Muñoz said.

Somewhat ironically, some analysts say the deal brokered in Congress contains similarities to a proposal that intransigent PRI lawmakers shot down earlier this decade.

“The least common denominator that we have now is the one that we had several years ago. Everyone agreed that Pemex needed an administrative and a financial reform, that’s what it has,” said Federico Estévez, political science professor at ITAM.

“Four years ago it was impossible because the PRI was unwilling to play ball.”

ANOTHER PAN ACHIEVEMENT
President Felipe Calderón took pains to point out that approval of an energy reform package marked the fifth major reform to come out of a divided Congress during his administration. Other reforms included changes to state pensions, tax collection, the electoral system and the criminal justice system.

The path to achieving energy reform took a toll on the governing party, however. Calderón appointed his most trusted adviser, Juan Camilo Mourño, as interior secretary in order to foster better relations with Congress. Mourño was almost immediately assailed for allegedly steering Pemex contracts toward a family firm while serving in other government positions earlier this decade. He was eventually cleared of any improprieties, but his role as a mediator was damaged.

The PAN later sacked party Senate leader Santiago Creel in May to give a new “push” to energy reform proposals that appeared stalled. Analysts say that energy reform simply provided a pretext for replacing Creel, who had a history of butting heads with Calderón and angered the party leadership by accepting a debate challenge on petroleum issues from López Obrador.

PRD: WINNERS AND LOSERS
Energy reform arrived in the Senate mere weeks after the PRD staged a messy internal election, which was eventually annulled by the electoral tribunal. PRD officials spoke of finding unity in rallying against energy reform, but it never really materialized as party moderates disagreed with staging a congressional takeover and avoided participating in López Obrador’s “petroleum defense movement.”

The PRD eventually pitched its own proposals and its members of the Senate Energy Committee take credit for achieving the removal of the provision awarding incentive-laden contracts to Pemex contractors. But López Obrador refused to back the final outcome achieved late last month.

“The anti-López Obrador faction … by putting their mark on the reform, they delivered a blow to López Obrador,” said Muñoz of the Universidad Iberoamericana.

“They landed a strong blow to the mobilizations that he leads. His image remains marginal ... and damaged. López Obrador lost his ability to steer the legislative agenda.”

OTHER PLAYERS
The nation’s five small political parties split on energy reform, with the Convergence party and Labor Party – staunch López Obrador allies – voting against the measure. The Green Party claimed victory for having measures included that promote energy conservation and foment the use of renewable sources of energy.

Muñoz commented that many in the business class with PAN ties would come out as winners due to the expanded role for the private sector. Estévez from ITAM agreed.

“The big winner will be all those little Mexican firms,” he said.

“The next best thing to a government bailout is a government contract. It’s just about business patronage."
Posted by David Agren at 14:47