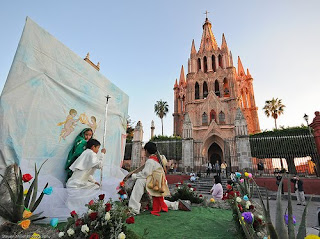 I avoided working on Christmas Day for the first time in three years. But I noticed enough happenings back in Mexico worth mentioning in a blog post. (There certainly weren't any here in Canada worth mentioning, spare this outstanding year-end column penned by Lord Conrad Black from his Florida prison cell on the worst nonsense of 2009.)

Trips to the newsroom on the past two Christmas Days were rather bleak affairs - and made even more bleak by a big boss that was partial to a no-fun, let's-take-ourselves-too-serious editorial policy that kept the lighter side of the news out of the newspaper on holidays. (How many times can you write seriously about Andrés Manuel López Obrador rallies in the Zócalo? For the record, I've done it more than 20 times.)

The lighter side of the news in Mexico around this time of year often involves fireworks - or, more accurately, some mishap with fireworks, such as a pyrotechnics warehouse blowing up in Cancún.

And with most Mexicans feasting on their Christmas dinners - accompanied by generous amounts of drink - late on Dec. 24, a not-so-enterprising reporter in León wrote about the traditional remedy for a night of hard drinking: A hot bowl of menudo, or tripe soup. Menuderías were, no surprise, busy on Christmas morning, ladling up hot fare for those that hit the liquor a little too hard.

Others hitting the liquor a little too hard got busted by the "alcoholimétro," or breathalyzer. The Mexico City Public Security Secretariat reported that 1,096 motorists have been detained so far this holiday season for failing breathalyzer tests. Cops in the capital have reputedly been less inclined to take bribes from those anxious to avoid a possible trip to the drunk tank.

Reforma, meanwhile, noted that the Mexico City prison population also got into the Christmas spirit by hitting the liquor a little too hard. The newspaper reported in a Boxing Day story that wealthier inmates celebrated Christmas with feasts that featured "Serrano ham" along with "alcohol, cigarettes, drugs, music and ... and hired women."

Inmates with culinary skills reportedly prepared the feasts for their wealthier counterparts, who, the Mexico City daily said, "Are known as godfathers." An inmate known as Juan "N" told Reforma that guards got in on the act, too, but in a far less festive fashion. He said that the guards charged less-fortunate inmates double to be marked "present" during roll call because they needed money for Christmas bonuses and didn't want to have to disrupt the prison parties.

Christmas, unfortunately, was bleak for many in Mexico's working and lower classes, who have suffered through an economic crisis in 2009 that has been marked by rising prices, lower wages and record unemployment.

El Universal interviewed one of the Santas moonlighting in Mexico City's Alameda Central, who said he took the gig because his construction job wasn't giving him any hours. The 15-year-old Santa said that his temporary gig paid 130 pesos per day and that he liked the work - even though his reasons for saying so seemed truly dismal.

"They pay me less here, but I like it more," he said. "I remember my childhood [while working as a Santa], although Santa never brought me anything."

One person grumbling about the big Santa better known as the federal government not bringing anything for anyone was López Obrador - the so-called "legitimate president" and self-styled champion of the downtrodden. Not one to avoid mixing disparate happenings and holiday events with his pet causes - recall his August 2008 proposal to solve insecurity and kidnappings by avoiding the "privatization, open or disguised, of the national petroleum industry" - López Obrador invoked Jesus Christ in his Christmas Twitter remarks.

"According to history, a day such as today, 2009 years ago, Jesus Christ was born, the most important defender of the poor that has ever existed."

Naturally, Mexico's religious institutions weighed in on Christmas - but not with the usual tidings of comfort and joy. Bishop Raúl Vera López of Saltillo - a man, who, like López Obrador, shows frequent disdain for the country's political class - delivered a Christmas Day rebuke to the federal government's recent scalping of cartel kingpin Arturo Beltrán Leyva.

Members of the Mexican Navy shot Beltrán Leyva dead during a Dec. 16 raid in Cuernavaca. That raid, and the subsequent papering of the body with bank notes by crime scene workers, upset the good bishop. He told inmates at a women's prison that the federal government appeared to have no interest in capturing Beltrán Leyva, only executing him.

"They went to execute, not to apprehend," the bishop said.

"They went to execute, in a way to exhibit the executed people in the same way they exhibited those that were killed and left hanging from trees in the era of the Revolution.

"Now they're smearing them in bank notes."

Bishop Vera has been critical of the federal government's war on drugs from outset and told me in June 2007 that soldiers should be sent back to their barracks since they lack the proper training for dealing with the public.

The Archdiocese of Mexico City differed. Cardinal Norberto Rivera - who seldom sees eye-to-eye with Bishop Vera - told reporters Dec. 20 that he favoured keeping soldiers in the streets since there wasn't another organization ready to take their place.

But the cardinal became far more animated by the Mexico City Assembly (ALDF) approval last week of same-sex marriage laws and the last-minute changes to the legislation to allow same-sex couples to adopt children.

Archidocese of Mexico City publication, Desde la Fe, reported Dec. 24 that during the archdiocese's annual posada, the cardinal "expressed his discontent with the recent approval by the (ALDF) of 'marriages' between persons of the same sex and the adoption of children by theses couples." (Bishop Vera, for the record, backed a 2007 initiative in Coahuila state, site of his diocese, that approved same-sex civil partnerships. He also has blessed the formation of a gay Catholic youth group in Saltillo.)

The salvo against the ALDF for its approval of same-sex marriage was only the latest in a series of tart editorials and statements from the archdiocese against the ALDF and the Chamber of Deputies. Past salvos have taken issue with lawmakers' lavish salaries, partisan political posturings, and their supposed frivolity in the face of the serious economic and social problems facing the country. The archdiocese went even further than just blasting the ALDF for approving same-sex marriage, however. The archdiocese issued an especially grumpy Christmas statement blasting the recently approved Mexico City budget, which increases taxes and metro fares and imposes a new water tariff regime that is meant to stave off forced water rationing in 2010.

"Why is the [majority] PRD, a fierce opponent of federal taxes, such a thief on local (taxes)?" the archdiocese asked.

"Will it be that they need more money to sustain corruption in the boroughs and the scandalous budgets of local deputies that they only use to approve criminal laws such as the one for abortion, immoral ones such as weddings between homosexuals and unjust ones such as the adoption by couples of the same sex.

Going beyond the ALDF, the archdiocese took issue with federal lawmakers, too. A Dec. 1 editorial asked federal lawmakers "to set the example" and take less generous Christmas bonuses, known as an aguinaldos.

The 500 deputies took their usual bonuses - a pro-rated sum of 65,000 pesos this year. The bonuses also included 9,157 pesos in coupons for a Christmas dinner.

At least there was no re-run of last year, when the deputies were reimbursed the money from their aguinaldos that had been deducted in taxes.
Posted by David Agren at 00:15

Email ThisBlogThis!Share to TwitterShare to FacebookShare to Pinterest
Labels: Mexico