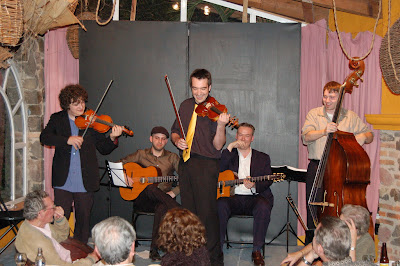 Photo by Steven H. Miller
The Northern Lights Music Festival wraps up in Ajijic on Feb. 27 with a gala concert. The festival, which turned five this year and generally showcases young Canadian talent, was co-founded by Chris Wilshere (wearing the gold tie) a Toronto native who now plays violin for a state symphony orchestra in Culiacan, Sinaloa - a town perhaps better known for banda sinaloense rather than classical sounds. Despite the challenges of fomenting a demand for classical music in Mexico, the festival is now one of the biggest in the region.
UPDATE: The Toronto Star ran a story that I wrote on Chris Wilshere and the festival in the Feb. 24 edition: http://www.thestar.com/artsentertainment/article/184786
Posted by David Agren at 12:45