Stars and stripes over the Chapala Malecon 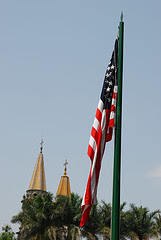 A steady stream of feature articles muse about an influx of Americans moving to Mexico. Some one million Americans supposedly now live here. In Chapala, a municipality south of Guadalajara and the home of a large expatriate enclave, the local government recently began flying both the U.S. and Canadian flags at its recently renovated wharf and malecon.

The mere sight of a Mexican flag drives clowns like the Minutemen nuts, but here in Chapala, the Stars and Stripes gently flutters over a government-owned site - and none of the locals seem bothered by that.

Email ThisBlogThis!Share to TwitterShare to FacebookShare to Pinterest
Labels: Chapala