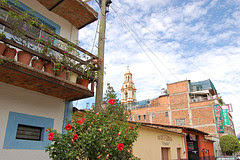 
I spent the weekend in Ajijic, a town on the north shore of Lake Chapala, enjoying the moderate climate, spectacular lake views and a few adult beverages. For those reasons, Canadians descend on the region in droves. According to the Canadian Embassy in Mexico City, some 8,000 Canucks winter here and 3,000 live in Ajijic year round, making it one of the largest enclaves of Canadians outside of Canada. While idyllic, it falls short of perfection, but not by much. (I prefer nearby Guadalajara as I'm young and speak Spanish.)

Most members of the Canadian population here expressed dismay - in some cases anger - with the coverage of the recent death of a Canadian tourist in Cancun and the portrayal of Mexicans as sleazy and inept. (Funny how once cocaine was citied in a toxicoligy report the Canadian media sheepishly backed off the story.) As one expat sarcastically asked me this weekend: "Is there a lack of bad news in Canada?"

Some Canadians come to Ajijic to simply stretch their retirement savings. They don't stay for long. The people who retire here generally love Mexico and appreciate the culture - even if there are a few inconveniences. Of course, no one in Canada cares about that.

I've written many stories on Canadian issues and expats over the past two years. Contrary to what many Canadians think, Mexico is full of opportunities, law-abiding citizens and a welcoming culture. Mexicans truly like Canadians and show a genuine interest in our country. It's a shame that so many Canadians are too provincial to understand that, or reciprocate the good will.

Rebelde with a cause (FFWD)
Posted by David Agren at 23:24