Tourist tragedies do not reflect the true Mexico 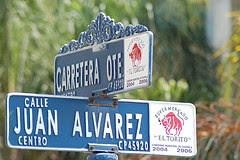 Tourist tragedies do not reflect the true Mexico

David Agren, For the Calgary Herald

Chris Wilshere left Toronto several years back for an orchestra job in the sweltering heat of Culiacan, Mexico, a prosperous state capital north of Mazatlan famous for a baseball team called the Tomateros (Tomato Growers) and a shrine to Jesus Malverde, the patron saint of narcotics traffickers.

Some of his colleagues never understood his motives for heading south, but he found a steady paycheque, appreciative audiences for classical music and a pretty young lawyer, whom he married six months ago.

Virtually everyone can recount stories of their brushes with narcos -- like the Hummer dealership employee who witnessed someone paying for three new vehicles with a thick wad of cash.

While acknowledging, "Mexico doesn't come without its problems," he considers his adopted home "safe" and expresses few misgivings about his personal security.

"I think that as First World (residents) we get paranoid over the tiniest, insignificant things that may threaten our health or safety."

Ajijic is one of the largest enclaves of Canadians outside of Canada.

The Canadian Embassy in Mexico City estimates some 8,000 expatriates winter in the region.

Approximately 3,000 Canadians live there year round, although with high-speed Internet, VoIP phones and satellite TV, many closely follow affairs back home.

And what they're seeing nowadays -- a spate of tourist misfortune stories -- dismays virtually everyone, including Dan McTavish, the former Canadian Club president in Ajijic.

"Everyone down here can watch City TV, which they get through their satellite systems, and see crime and shootings back in Toronto," he comments.

Crime happens in Ajijic too. A Vancouver man in a neighbouring municipality was shot dead in late 2005 for unknown reasons, although rumours abound about a water dispute. A London, Ont., couple was struck in a January hit-and-run -- an incident that reportedly happened after an evening of drinking.

The story made the front-page of a national newspaper -- as if such calamities never happen in Canada.

The incidents unfortunately blemish Ajijic and Mexico's image, but hardly sour any Canadians on their adopted country, which is generally placid -- spare parts of the northern border region -- and populated by law-abiding people.

Many Canadians express feelings of hurt and embarrassment over the provincial viewpoints streaming out of Canada these days, along with the eagerness to malign Mexico for tourist tragedies that often stemmed from irresponsible or disrespectful behaviour.

"I can't help but feel (these are) individual situations that the media have run to sell papers," says Allan Rose, the former honorary Canadian consul in Guadalajara and a 20-year Ajijic resident.

Rose was consul during NAFTA's advent, a time when "Mexicans actually discovered where Canada was."

He frequently promoted Canada to Guadalajara-area universities and business organizations, which perhaps considered the diplomat "something of a novelty . . . a new-found interest."

Mexicans discovered Canada and now travel north in sizeable numbers for tourist and study excursions, but Canadians never reciprocated to the same degree.

"I'm personally aggrieved and hurt by some of these (negative) references," he says mournfully.

"If it were that dangerous, Canadians wouldn't be here."

Petty aggravations are rife in Mexico -- like early morning fireworks, discourteous drivers and abusive monopolies -- but it's a fascinating, complex and culturally rich country. Canadians here accept the shortcomings, even if they don't like them, and find it unnecessary and disrespectful to scold Mexicans for how they order their affairs. "It's their country to decide. It's our decision to live here," Parker says. "We like living here."
Posted by David Agren at 08:58