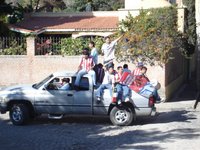 Only 10 days after leading Chivas to an improbably victory in the Mexican soccer league's Apertura (opening leg), goalie Oswaldo Sanchez traded the red and white candy-cane stripes of Club Deportivo Guadalajara for the somewhat less illustrious green and white stripes of Santos Laguna. The Torreon-based club - and not the UANL Tigres of Monterrey as previously rumored -acquired the star national team goalie after making what Sanchez called a "very attractive" package reportedly worth US $6 million over three seasons.

Santos, which is owned by Grupo Modelo (Corona), finished second from the bottom in the 2006 Apertura and risks relagation without a marked improvement in the upcoming Clausura. The club also signed midfielder Juan Pablo Rodriguez, who played on the 2006 Mexican World Cup squad.

Allowing Sanchez to leave would normally raise hackles of outrage in Guadalajara - his hometown - but with the team ending a ten-year championship drought last season, Chivas owner Jorge Vergara will most likely be forgiven - for now. Sanchez had flirted with the idea of playing in Europe after the 2006 World Cup, but didn't receive any especially attractive offers. (High transfer fees could have hindered the process too.) Given his age, 33, he'll probably finish his career in Mexico.
Posted by David Agren at 12:05