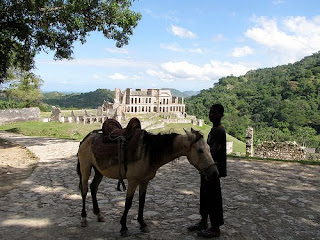 A young guide in Milot, Haiti, readies to the lead a horse to La Citadelle, one of the largest forts in the Caribbean. The Sans-Souci palace - ruined in an 1842 earthquake - is in the background.

MILOT, Haiti - The earthquake that shook Port-au-Prince failed to budge La Citadelle la Ferriere, an early 19th-century fortress that towers over this community in northern Haiti.

With thick, stone walls, rows of cannons and piles of cannonballs, along with breathtaking views from a setting nearly 900 metres above Milot, local tour guide Maurice Etienne calls it "one of the biggest fortresses in the Caribbean,'' and one of the best tourist attractions in the region, too.

And now, with the economy in shambles and the capital in ruins, Etienne and others in Haiti's nascent tourism industry see potential in places such as La Citadelle and are calling for the country to urgently embrace one of the Caribbean's most lucrative industries.

The proposal to bolster tourism in Haiti isn't entirely new, however. Haiti was among the pioneers of Caribbean tourism in the 1950s, but the industry petered out with the rise of strongman Francois "Papa Doc'' Duvalier.

Read more at Canada.com.
Posted by David Agren at 14:18