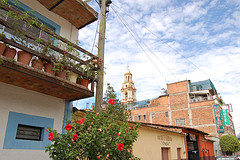 Here's the top of the story:

Canadian retiree Dan McTavish, who has lived in Ajijic, Jalisco, for more than a decade, listed several reasons why so many of his fellow Canucks settle in the Lake Chapala area instead of San Miguel de Allende or any other part of Mexico’s interior.

Like many Canadian expats, he mentioned the weather as one of the main factors. The microclimate surrounding Lake Chapala is decidedly less chilly and often described as “perpetual spring.”

“Canadians come to Lake Chapala because it is not as cold as San Miguel,” the former Toronto native said. Additionally, “It is near ... Guadalajara. I can get off an airplane from the US or from Mexico City [on my way back from Canada] and be at my home in 35 to 40 minutes.”

While San Miguel de Allende has a noticeable Canadian community—estimated at about 15 percent of the expatriate population —Canadians seemingly dominate the Lake Chapala area, which is considered the largest enclave of Canadians outside of Canada, except parts of Florida in the wintertime.

Read the whole feature under the community section of Atencion's website.
Posted by David Agren at 17:08