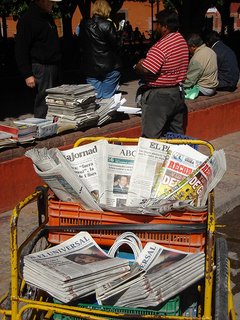 Mexico's war on drugs keeps claiming more victims. A Committee to Protect Journalists' report says seven Mexican reporters lost their lives last year and the country is now the most dangerous place to practice the craft in the hemisphere.

In the bad old days of one-party rule, the government silenced upstart journalists and newspapers with a newsprint monopoly and the withdrawal of lucrative advertising contracts. Many reporters had patrons and penned favorable articles in exchange for cash. (Reporters also sold advertising.)

Nowadays, reporters regularly criticize the government and all politicians draw scrutiny. Media-shy drug gangs, however, have effectively scared off reporters through a series of gruesome executions and disappearances. No reporter I know, will touch a drug-related story. It's a potential death wish.
Posted by David Agren at 11:53

Email ThisBlogThis!Share to TwitterShare to FacebookShare to Pinterest
Labels: journalism, war on drugs